Why Ford’s Stock Is Still Struggling Under CEO Jim Hackett

Tuesday marked one year since Ford Motor Company’s (NYSE: F) board of directors ousted Mark Fields as CEO, replacing him with Jim Hackett — a futurist and former Steelcase CEO who had joined Ford to run its future-mobility subsidiary.

It has been a year of ups and downs. Hackett’s promotion was followed by a broad reshuffling of Ford’s senior executives and a lot of talk about improving Ford’s “fitness” as a company.

A year later, Ford’s share price looks to be stuck in neutral. 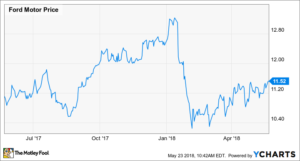 To understand why, I think we need to look back at why Ford’s board chose Hackett — and at what he has and hasn’t done in the year since then.

Hackett’s selection as Ford’s CEO was about more than the company’s stock price. Executive chairman Bill Ford told me at the time that the decision to replace Fields with Hackett was driven by a need to accelerate the transformation of the company in the face of impending disruption from new high-tech entrants.

The fact is that we are in unprecedented times, both in terms of opportunities and potential landmines. I believe that we need a transformational leader who has done it, who has reimagined a company into a future and then brought that company along with him. We’re very fortunate to have that in Jim.

To be clear, I absolutely think that was sincere. At the time, analysts were questioning the state of Ford’s future-tech efforts, particularly given the very visible work being done at rival General Motors (NYSE: GM) around self-driving, electric vehicles, and shared mobility.

But I think Ford’s board of directors might have also had another, more blunt reason for replacing Fields. Ford’s share price had taken a big dive during his tenure as CEO. 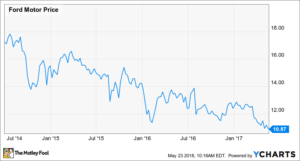 F data by YCharts. Chart shows the price of Ford’s common stock from July 1, 2014, when Mark Fields took over as CEO, through May 19, 2017, the last trading day before his departure.

Those things are related, of course. In the last year or so of Fields’ tenure, it became clear that GM was making significant progress toward a future vision of mobility, and its stock price was reflecting that progress. Ford’s directors were right to wonder if Fields had let the company fall behind its old rival. 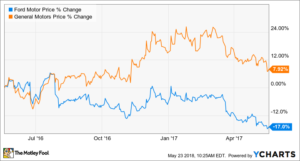 I think Ford’s board hoped that Hackett would be able to drive a more rapid transformation of Ford into a company that could thrive in a post-disruption automotive future. I think they also hoped that investors would reward his work with a higher stock price, just as they had been rewarding GM’s efforts. 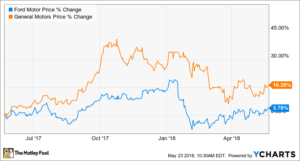 F data by YCharts. Chart shows the price change of General Motors and Ford stock from May 22, 2017 through May 22, 2018 — the first year of Jim Hackett’s tenure as Ford’s CEO.

Why Ford’s stock has yet to soar

I think the problem is that after a year in office, Hackett still has yet to articulate a clear, detailed plan for improving Ford’s profitability and ensuring that it remains competitive in the high-tech near future. He has said quite a bit about his intentions in general terms, but the details are still lacking.

Here’s an example of what I mean. During Ford’s first-quarter earnings presentation last month, Hackett showed this slide. 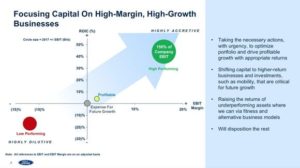 As you can see, the slide makes clear how Hackett and his team are thinking about the challenge of boosting Ford’s profitability. Some of Ford’s products and businesses are very profitable, and some are unprofitable. The clear hint is that Ford is looking at jettisoning some or all of the latter. But we don’t yet know what those “low-performing” products or businesses are, or when that jettisoning might happen.

We’ve seen some bits and pieces of the effort, of course. Ford’s much-talked-about move to eliminate most of its sedan models from its lineup in North America is a big one. But we still don’t know what else might be coming — or what any of these moves will do for Ford’s profitability and competitiveness.

That’s one thing that has changed in a big way under Hackett. Fields had his ups and downs as Ford’s CEO. But as with his highly lauded predecessor, Alan Mulally, investors always felt informed. We knew where Ford was going and why.

Though it’s still true to some extent under Hackett, we have had to squint through an awful lot of vagueness to see it. Simply put, I think Ford’s share price is unlikely to rise significantly until (or unless) that haze of vagueness clears.

Or put another way, until Hackett — or someone — explains Ford’s plan in clear terms that resonate with investors.