That seems like a big whiff, as CEO Tom Rutledge predicted last fall back that Charter could potentially grow video subscribers in the future, due to new packaging and products. That obviously hasn’t happened, and considering Charter gets over 40% of its revenue from video subscribers, the acceleration of cord-cutting has put shareholders in full-blown panic mode.

But should shareholders follow the cord-cutters and part ways with Charter? Here’s why I’d say no. 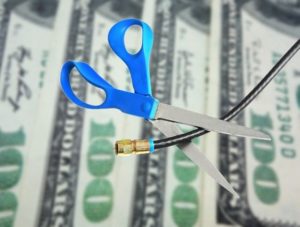 One way or another

While Charter did lose video subscribers in the quarter, it still grew overall video revenue by 5.3%, due to price increases (in fact, increasing prices may have been a reason for so many customer defections). Content costs continued to rise 8% per subscriber in the quarter, so Charter wasn’t doing this precipitously, and its primary competitors are also in the same boat.

CFO Chris Winfrey insinuated the company may also begin raising broadband prices on customers who don’t sign up for the video bundle: “I think the ARPU [“average revenue per user”] headwinds that we’d had through the initial SPP migration should be less going forward… If we can get more of that for customers unwilling to take video, we will.”

In other words, if you think you’re outsmarting the cable companies by cutting the cord and going streaming-only, you may be in for a rude awakening: your broadband costs may rise, not to mention the rising costs of streaming services themselves. In fact, Charter rival Comcast (NASDAQ: CMCSA) has already found a subtle way to increase prices. According to ARS Technica, Comcast is increasing its broadband speeds, and has made those speeds free to its current subscribers… provided they also subscribe to Comcast’s video bundle. But if you refuse video, you’ll probably have to pay, and if you’re streaming-only, you’re going to want those higher speeds.

Finally, the cable product is a actually lower-margin business than the core broadband offering, which is really an indispensable service. So, even if Charter continues to lose video customers, it wouldn’t hurt profitability as much, as the higher-margin broadband business is still growing healthily.

The bottom line is, with the repeal of net neutrality by the Ajit Pai-led FCC under the Trump administration, cable providers should have the means to get their share of profits from us lowly customers, whether we like it or not.

The ongoing “in-sourcing,” of customer service efforts back to the U.S. from the Phillipines has caused disruption, according to management, and brought higher levels of customer churn last quarter. Charter is currently in the process of merging 13 different billings systems into four, which will later become two, and this ongoing process caused hiccups customer qualification and the collection of bad debt (people not paying their bills). Still, management was confident that once integration is complete, customer satisfaction (where Charter hopes to differentiate from rivals) will go up and churn will go back down.

The need for speed

Not only is the company upgrading service, but Charter is also still in the process of heavily investing in its network, with all-digital set-top boxes and higher speeds. Management expects to have one gigabit capability over its entire footprint by the end of this year, up from only 45% in the first quarter. The company already raised minimum speeds to 200 megabits per second in select markets last quarter.

All of these network upgrades have resulted in elevated costs, which is why capital expenditures skyrocketed 40% over the year-ago quarter, which also may be spooking investors. However, once the network is fully upgraded, management expects capital expenditures to be “a materially lower amount” in 2019. So, while increased costs may leave investors rattled today, they should ease once the integration is further along.

Getting one-gigabit capability should also help win more high-margin broadband customers, putting Spectrum on par with main rival AT&T (NYSE: T), which offers one-gig capability virtually everywhere. That being said, AT&T plans often include data caps and higher pricing for those speeds, whereas Charter’s Spectrum plans are unlimited. Getting speeds up to snuff over its entire footprint will likely help Spectrum take some share away from its big rivals as the year goes on.

If management is right, and both customer churn and network investments decrease next year, you may be getting a deal: Investors are only paying roughly nine times next year’s Enterprise value to EBITDA (earnings before intrest, taxes,depreciation and amortization), a much lower valuation than Charter has garnered in the recent past:

Thus, while investors saw an ugly combination of increasing costs and slowing subscriber additions last quarter (along with video subscriber declines), Charter’s ability to raise prices, offer new bundles with mobile, and decrease capital costs next year makes the company worth a look after its post-earnings drop.