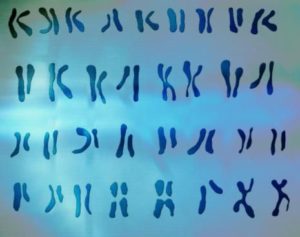 Scientists have discovered the first example of a gene that is only found in one sex and provides protection against cancers including an aggressive form of leukaemia.

The gene is only found on the Y chromosome which, until today, was thought to only carry genetic information that leads to an embryo developing as a male, rather than a female, foetus.

It appears to offer an extra layer of protection against acute myeloid leukaemia (AML), a development researchers at the Wellcome Sanger Institute and the University of Cambridge said changed the way the Y chromosome was viewed and could lead to new treatments.

Each year, about 2,600 people in the UK are diagnosed with AML, an aggressive blood cancer that develops in cells of the bone marrow and leads to life-threatening infections and bleeding.

Mainstream treatments for the condition have remained unchanged for decades and just 20 per cent of patients survive for five years after diagnosis.

The team studied the X-chromosome gene UTX in human cells and in mice to try to understand its role in AML.

They found the loss of the UTX, which is known to be mutated in many tumours, hastens the development of AML. This is because the healthy gene performs a key function in coordinating cellular proteins and the gene expression.

The researchers also found that UTY, a related gene on the Y chromosome, protected male mice that were lacking UTX against developing AML, because it can stand in and perform the role of UTX in preventing the unchecked growth of cells.

The study, published in Nature Genetics, showed that in AML and in several other human cancers types, loss of UTX is accompanied by loss of UTY, meaning the cancer-suppressing role of UTY extends beyond AML.

Lead author Dr Malgorzata Gozdecka, of the Wellcome Sanger Institute, said: “Previously it had been suggested that the only function of the Y chromosome is in creating male sexual characteristics, but our results indicate that the Y chromosome could also protect against AML and other cancers.”

Professor Brian Huntly, of the University of Cambridge and a consultant haematologist at Cambridge University Hospitals NHS Trust, said: “It is known that men often lose the Y chromosome from their cells as they age, however the significance of this was unclear.

“Our study strengthens the argument that loss of the Y chromosome can increase the risk of cancer and describes a mechanism for how this may happen.”

“This important research helps build a fuller picture of what goes wrong genetically as this highly aggressive leukaemia develops. Understanding this process is key to developing targeted drugs for AML, allowing us to move away from gruelling and often ineffective chemotherapy-based treatments.”

PrevPreviousCBC’s FM radio signal in Sarnia to undergo upgrades
NextVolvo is bringing Google Assistant to your car, even if you don’t use AndroidNext