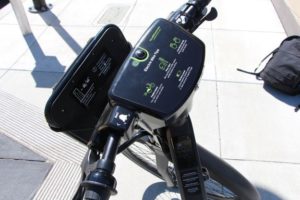 Ford GoBikes are already all over San Francisco, but starting on Tuesday, 250 electric-assist bikes will join the fleet for the same price — at least for now.

I got to try one out ahead of time, taking a test ride through San Francisco’s crowded South of Market and hilly Potrero Hill neighborhoods. My prediction: The e-bike, a Ford GoBike Plus, will be in high demand. The motor provides a jolt of pep, and I was able to climb a fairly steep two blocks of Mississippi Street — something I never would have done on a regular bicycle.

Motivate, the bike-share operator behind Citi Bike in New York City, rushed to bring the new e-bikes into the Bay Area after a spate of other e-bikes and scooters flooded the market. Like its pedal-powered cousin, the new bikes require a dock. These aren’t a jump-on-and-drop-off anywhere option, but you don’t have to worry about blocking the sidewalk or walkway, since the bike has a designated space.

Ford’s e-bikes follow the trend from Chinese bike companies that have crept into North American cities. In China, the electric bikes have been popular for the past few years, but the easy-to-ride bicycles come with major issues, like sidewalk litter, rampant theft, and mass bicycle graves filled with broken and abandoned bikes.

Also in the mix is Uber’s recently acquired Jump e-bikes, a San-Francisco-based share program. Those don’t require a dock, but they feel less zippy compared to the Ford bikes. The built-in U-locks on the red Jump bikes do make it easier to use a bike rack wherever you go. A Motivate spokesperson said Ford is researching a dockless version of its bicycles.

The Ford e-bike bike is pretty heavy at about 65 pounds, but once you’re in the saddle and going up to 18 miles per hour, the hefty frame and GenZe battery make you forget about all the clunkiness.

Motivate estimates the bikes will last about 25 miles on a single charge. The 345 Wh Lithium-ion battery comes with a large display screen telling you how many bars of battery are left as well as your speed.

Like the traditional bicycles, the Plus e-bikes can be picked up through the app and are included in the same membership plans, like an annual $149 plan or $10-day pass. For the new e-bike’s introduction, single rides are $2 instead of $3 for a limited time.

Just remember you’re still on a bicycle — even if it feels like you can take on the cars as you zoom through traffic.