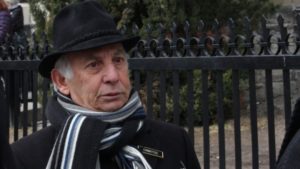 At 80 years old, Joe Maneli has been the director of one of Toronto’s oldest Good Friday parades for over five decades, but despite his age, he isn’t quitting any time soon.

Maneli handles everything from casting the actors to making sure everything runs smoothly for the three-hour event.

And while this was his 53rd year organizing the the annual St. Francis of Assisi Church procession, he wasn’t just overlooking his actors.

As as the guards reenacted pushing Jesus to the ground, Maneli watched as a passionate spectator, moved by the scene.

“It’s too emotional, it just gets your breath away,” said Maneli.

A tradition over 5 decades in the making

The sky was fittingly grey as hundreds of religious spectators gathered in Toronto’s Little Italy neighbourhood to reflect on Good Friday, believed to be the day of Jesus’s death.

For Christians, the day is one of fasting, penance and solemn service, and precedes Easter Sunday.

The procession running through Little Italy is a longstanding tradition known for its poignant reenactment of Jesus’s last moments. Volunteers dress in traditional garb, as Jesus and the Twelve Apostles reenact the Stations of the Cross.

The 56-year-old reenactment in Toronto’s Little Italy community symbolizes the path Jesus is believed to have walked before being crucified.

The commemoration is a combination of religion and tradition. Some members of the St. Francis of Assisi Church community have been participating in the procession’s annual reenactment for decades.

Portraying Jesus at the annual procession was Joseph Rauti. He’s worn the same wig since 1968, acting as Jesus for some 50 years.

With a heavy brown cross weighing on his back, Rauti portrayed solemnly carrying the sins of his followers for three kilometres.

For three days leading up to procession, Rauti fasted.

Rauti’s reenactment doesn’t stop at the streets of Little Italy. He brings his performance to the elderly spectators inside the St. Francis of Assisi Church who can’t endure a three hour parade.

“When I come inside the church, I fall on the floor,” said Rauti of the modified reenactment he performed for those inside.

For the last 53 years, Maneli has been its director and he says he plans to keep directing until he’s 110.

“They don’t want me up there,” he joked, lifting his hands to the sky.