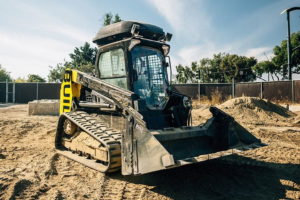 Automation is changing the face of nearly every industry in the world, but the construction industry may lead the way for robots.

The Associated Press reports on the intersection between tech and construction, with new startups unleashing a wave of innovation in robots, drones, and software. A big part of the reason is that construction companies can’t find workers. But robots don’t mind getting dirty.

“To get qualified people to handle a loader or a haul truck or even run a plant, they’re hard to find right now,” mining plant manager Mike Moy told the AP. “Nobody wants to get their hands dirty anymore. They want a nice, clean job in an office.”

Employees at a masonry company in Colorado recently learned how to operate a bricklaying robot named SAM, short for Semi-Automated Mason. SAM can lay 3,000 bricks in an eight-hour shift using a conveyer belt and robotic arm. Rather than fearing job loss, however, the workers welcome the opportunity to automate some of their more mundane tasks.

“There are lots of things that SAM isn’t capable of doing that you need skilled bricklayers to do,” said Brian Kennedy of the International Union of Bricklayers and Allied Craftworkers. “We support anything that supports the masonry industry. We don’t stand in the way of technology.”

Built Robotics is a startup from Noah Ready-Campbell, a former Google engineer and son of a construction worker who’s designing self-operating excavators, backhoes, and other construction vehicles. “The idea behind Built Robotics is to use automation technology make construction safer, faster, and cheaper,” he said. “The robots basically do the 80 percent of the work, which is more repetitive, more dangerous, more monotonous. And then the operator does the more skilled work, where you really need a lot of finesse and experience.”

Other machines are being used to analyze and report on the work itself. Doxel is a roving robot that’s used to monitor whether construction projects are proceeding according to schedule, keeping projects within budget. By tracking and analyzing activity at an often-chaotic job site, Doxel can track progress and identify potential problems before they arise.

Drones are another tool developers can use to simplify time-intensive tasks. For example, a drone from a company named Kespry uses 3-D mapping to survey and quantify huge piles of rock and sand across a huge site measuring dozens of acres in less than two hours. A contractor with a truck-mounted laser would take a full day for the same task.

“Not only is it safer and faster, but you get more data, as much as ten to a hundred times more data,” said Kespry CEO George Mathew. “This becomes a complete game changer for a lot of the industrial work that’s being accomplished today.”

PrevPreviousGoogle is working on blockchain technology for the cloud
NextCan the DSLR reinvent itself to thrive in a mirrorless world?Next