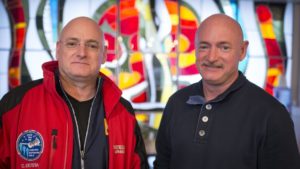 Research by NASA on identical twins has revealed that being in space changes human genes.

Scott Kelly spent 340 days on the International Space station, while his brother Mark remained on earth as a control subject.

On his return, tests showed that parts of Scott’s chromosomes, which contain DNA in which gene information is stored, had altered in shape.

Most of the changes, due to factors such as oxygen deprivation stress, increased inflammation and a restricted diet, returned to their pre-flight state.

In its report NASA said: “Whole-genome sequencing showed each twin has hundreds of unique mutations in their genome, more than expected, and some were found only after spaceflight, circulating in the blood as “cell-free DNA.

“This is thought to be from the stresses of space travel, which can cause changes in a cell’s biological pathways and ejection of DNA and RNA.

“Such actions can trigger the assembly of new molecules, like a fat or protein, cellular degradation; and can turn genes on and off, which change cellular function.

“Significant responses were found for at least five biological pathways in Scott during his time in space. These responses are important for future missions.”

Identical twins come from one fertilised egg, containing one set of genetic instructions, or genome, formed from combining the chromosomes of mother and father.

However recent research has shown that identical twins are rarely genetically identical. Regions of the genome can have differing numbers of a gene.

These variations could explain why differences in susceptibility to specific diseases, for example, have been found in twins.

So the Kelly brothers might not have been genetically identical to start with, but after Scott’s time in space they are even less like each other.

PrevPreviousWhy Cloud Company Stocks Are Soaring
NextCross a John Deere with a Roomba, and you get this crop-monitoring robotNext