Mortgages get more expensive as rates hit near 4-year peak 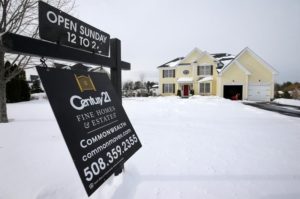 The cost of borrowing for a home keeps going up, a potential obstacle to would-be buyers at a time when home prices are at all-time highs in more than half of major U.S. markets.

Average long-term mortgage rates have been rising steadily this year and are now at the highest level in almost four years. That translates into higher mortgage payments and more money paid out over the life of the typical 30-year home loan.

The pickup in mortgage rates dims prospects for would-be homebuyers struggling to compete in a housing market where a thin inventory of homes for sale continues to drive up prices.

The median U.S. home price climbed 5.3 per cent in the last quarter of 2017 to $235,400, according to the National Association of Realtors. The trade group said that prices for single-family homes hit record highs in 114 of 177 major metropolitan areas that it tracked.

The increases in home prices have been growing at a pace more than double the gains in average hourly earnings.

“We’ve seen 5-to-7 per cent price gains since 2015, and we’re still seeing prices rise this year,” said Javier Vivas, director of economic research at Realtor.com. “When you have that sort of growth with prices, and now with mortgage rate increases, that’s putting a dent especially in the entry level buyer.”

Recent wage gains and rising prices are stoking concerns about inflation picking up, which has caused investors to seek higher interest rates. Mortgage rates are closely aligned with the yield on 10-year U.S. Treasury notes, which has climbed above 2.90 per cent from 2.43 per cent at the end of last year.

Just a few months ago, homebuyers had the benefit of average 30-year mortgages that were 3.78 per cent in September. The low mortgage rates had eased some of the price pressures facing would-be homebuyers. Now they might find it harder to save for a down payment and purchase a home.

How much the latest rate increase affects the cost of a loan depends on whether one looks at the monthly cost, versus the cost over a 30-year span of a loan.

Using the median U.S. home price in December of $246,800, and assuming a 20 per cent down payment, a 30-year mortgage at 4.38 per cent would translate roughly to $986 a month, but to $157,653 paid in interest over the full term of the loan. The same home purchased in the first week of this year, when rates were just below 4 per cent , would have saved the buyer about $45 a month, but that would add up to roughly $16,163 in interest payouts over the loan’s full term.

The rise in mortgage rates this year is already spurring would-be buyers to act now, rather than wait until the spring, traditionally the busiest period for home sales, noted Kim Wirtz, a broker at Century 21 Affiliated in Chicago.

“Many sellers are listing their homes earlier and many buyers are buying a lot earlier than in the past,” Wirtz said. “Buyers are out there a little earlier than they normally would have been to try to lock in an interest rate before it’s too late.”

If mortgage rates keep rising at a quick pace, it could limit what people can afford to pay and cause demand for housing to fall.

So far, Wirtz hasn’t had any buyers lower their price range because higher rates have reduced their buying power.

“I have not yet had any buyers stop looking because of the rates,” she said. “But I believe that might be on the horizon.”

Economists expect rates to move higher this year. Bankrate’s forecast calls for rates on the 30-year, fixed-rate mortgage to climb above 5 per cent , then pull back to finish the year at 4.5 per cent .

That’s still a bargain to anyone who bought a house decades ago.

“The first home I bought in the ’80s was at double-digit interest rates,” said Mark Hamrick, senior economic analyst at Bankrate.com. “Were mindful that it was something that was historically unusual, but it didn’t dissuade us from buying homes and it didn’t kill the housing market.”