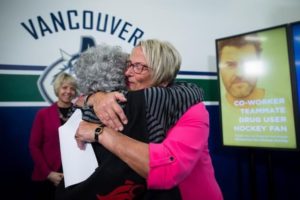 Mental Health and Addictions Minister Judy Darcy said the money is part of $322 million announced in last September’s budget update and will be administered by the First Nations Health Authority.

Indigenous people are also five times more likely to experience a non-fatal overdose as the province experiences one of its worst public health emergencies, Darcy said Thursday at a news conference following a wellness summit hosted by the health ministry.

“While amongst British Columbians in general who are dying of overdose, 80 per cent of them are men, in the case of Indigenous people half of them are men so that says something very powerful about Indigenous women and the particular risk they are at,” Darcy said.

Dr. Shannon McDonald, the health authority’s chief medical health officer, said 55 projects have been approved with the funding to provide a range of supports including expanded access to the overdose-reversing drug naloxone, more treatment options for people struggling with addiction in remote communities through telehealth, and “back-to-the-land” therapeutic camps.

Many of the addiction issues among Indigenous people on and off reserves are rooted in trauma, and diverse solutions are needed to help those who use illicit drugs in their pre-teens and into their 70s, McDonald said.

“We have a pain problem, not a drug problem,” she said, adding families are grieving loved ones who died from “a poisoned drug supply.”

McDonald said the health authority is working to analyze more data following the results of its first analysis last summer, which showed the overdose rates among Indigenous people were higher than the rest of the population.

The BC Coroners Service has reported that 1,422 people fatally overdosed across B.C. last year.

“The recent announcements by the coroners service do not give me hope that we’ve seen the kind of positive change in this situation for the First Nations and aboriginal population in the province that we might have hoped to see,” McDonald said.

Many First Nations people overdose away from home, she said.

“For whatever reason they are choosing to use their substance of choice away from the judgmental and shameful eyes of the people they love, where they might have gotten support.”

Data from the BC Patient Safety and Quality Council has provided the health authority with some understanding of the issue from drug users’ point of view, McDonald said.

“They talk quite clearly about trauma in their lives and racism as barriers to them accessing treatment. We need to change that.”

McDonald said naloxone training has been provided in 126 communities and that will increase to 203 communities.

Peer support is also an important component for those at risk of overdose, and the funding will help provide more programs to make that happen, she said.

“We want to support peers in the importance of their voices, the people who have a history of using, who know that story better than anybody else, who can relate to what people are going through and who can share the things that brought them to wellness.”