‘Die With Me’ App Will Help Relieve Your Low-Battery Anxiety 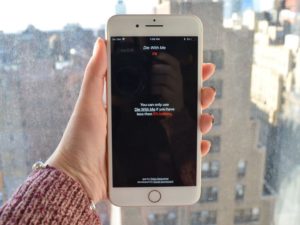 App Attack is a weekly series where we search the App Store and Google Play Store for the best apps of the week. Check out App Attack every Sunday for the latest.

With all the time we spend on our smartphones, our batteries tend to have trouble keeping up. This week, we have an app that will help ease the pain of your device reaching its temporary demise.

Chat app “Die With Me” — available for iOS and Android — can only be used when your phone’s battery is on less than five percent. Once your phone recognizes that it’s below that mark, you’ll have access to a chat room consisting of others suffering from the same issue.

Once your phone is at 4 percent or lower, the app will ask you to enter a name you’d like to identify yourself by. The freedom to create a username using any characters made me a bit nervous, as I could only imagine what lie ahead in the chatroom.

There is a user agreement you’ll have to accept that explicitly states not to say anything inappropriate, but does anyone really follow through with those? Should someone violate the agreement, you can report them by holding down on their message and tapping ‘Report Message,” which could potentially block them from using the app once the report is reviewed. 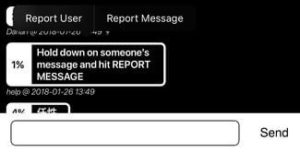 “Die With Me” is also very much in its infancy, so it’s important to take that into consideration while using it. We experienced some crashes — which could be due to the influx of users — but after a while it was smooth sailing.

Entering this chatroom felt extremely reminiscent of my pre-teen self sitting in front of my computer, back when my parents would warn me not to talk to strangers on the internet. But we’re all well past those days, and instead of “stranger danger,” I was actually having a sense of social anxiety. Even though I had no idea who these people were, I hesitated to jump into the conversation to say anything.

It also didn’t help the chat room was clearly flooded with tons of people, making it almost impossible to know if anyone even saw what you sent. The conversations are definitely interesting — with most people spewing random questions like “What kind of phone does everyone have?” or “Where is everyone from?” There was, of course, the occasional talk of politics but that died down quickly. 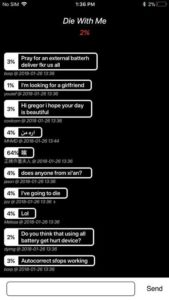 I worked up the courage to send a simple “How’s everyone’s day going?” and was pleasantly surprised when people actually started answering. Before I knew it, we were talking about our love for Nintendo and our favorite games. I was also no longer afraid to jump in when I wanted to contribute to the conversation.

When you’re in the chat room, you can also see the percentage that other people are at — which makes it even more comforting. While your battery slowly decreases, you’ll start to see others at the same amount and know that you’re not the only one who is about to reach zero. If you do start charging your smartphone, a little lightning bolt will appear beneath your name so others will be aware.

If you end up finding a charger before your battery dies, you’ll still be able to stay in the chat room up until a certain point. Once your battery reaches above five percent, it will lock you out and a message will appear letting you know you can only use the app if your phone battery is below that. But strangely enough, there were a few people with 64 percent battery still in the chat room, and everyone was equally as confused.

Being in the chat room felt weirdly similar to the random and light conversations my best friends and I have in our group chats. Since we’re busy throughout the day, we’ll randomly send messages here and there that spark short conversations. But sometimes, they won’t answer for hours and it’s rare they conveniently do when you need a distraction from the fact that your phone is dying.

But using “Die With Me” was weirdly comforting. Instead of scrolling mindlessly through social media apps slowly waiting to hit one percent and for my screen to go black, I was engaging in some entertaining conversations instead. It was a strange but refreshing experience and soon I found myself more bummed to have had to leave the conversation than I was that my phone died.

Some might think the premise of the app is absolutely insane, but having anxiety over your smartphone battery dying is clearly far more common than we all want to admit. After all, there’s nothing more calming than knowing that your phone is fully charged and you won’t have to worry about all the possible things that could go wrong with a dead battery.

It’s a temporary cure and companion for when you start to really panic that you’re phone is reaching that one percent mark. Also, who would’ve thought all it takes is a bunch of dying smartphone batteries for a group of strangers to bond?