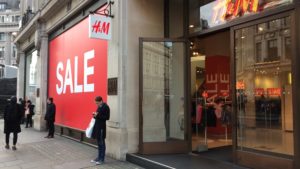 Hennes & Mauritz shareholders just endured another tough stretch, with H&M’s stock unraveling by some 20% since mid-December. Bears are growling that the fast-fashion powerhouse’s days as a growth story are over.

In the weeks ahead, the Swedish retailer might win back some investors as it gives its annual results on Jan. 31 and holds its first-ever capital markets day, a meeting for institutional investors, on Feb. 14.

But there is also a chance that the pessimists are right, and a big rally isn’t in the cards at this point.

“The company may continue to aspire to 10% to 15% annual sales growth, but with actual performance so weak and future store openings now set to be scaled back significantly, we think the days of consensus assuming that a ‘return to growth’ is just around the corner are coming to an end,” wrote Morgan Stanley analysts in a recent note. They have an Underweight rating on H&M’s stock HMB, +0.43% and a price target of 120 Swedish kronor ($15), implying a drop of more than 20% from the recent print near SEK157.

After sales gains of 18% and 19% in the fiscal years that ended November 2014 and November 2015, H&M delivered a 6% rise in 2016 and looks set for 4% growth in the just-concluded fiscal year, hampered by a decline in fourth-quarter revenue that H&M revealed last month. In the 2018 and 2019 fiscal years, sales growth is expected to range between 5% and 6%, according to consensus estimates from FactSet.

H&M has been “an international rollout story,” but lately there have been twists in that tale, Morgan Stanley’s Geoff Ruddell and Amy Curry say. H&M has more than 4,000 stores around the world, after clearing the 3,000-locations mark five years ago and topping 2,000 roughly a decade ago. Yet these days, H&M is closing stores in mature markets, as shoppers increasingly buy its $7 T-shirts online. Accelerating internet sales haven’t fully offset reduced foot traffic.

Moreover, the main challenge for H&M isn’t just adjusting to a web-centric world, but that its value proposition is fading for customers “who can now shop considerably more cheaply elsewhere,” write Ruddell and Curry. One rival with budget offerings: British clothing retailer Primark, owned by Associated British Foods ABF, -0.18% .

Smaller sales gains will lead to weaker profit growth, and H&M’s price/earnings multiple ought to continue to drop to reflect that it has been “several years since H&M has really been a ‘growth stock,’ ” the Morgan Stanley team wrote. Shares trade at 16 times forward-year estimated earnings, on par with U.S. clothing retailer Gap’s GPS, +3.11% P/E, and much cheaper than its Spanish rival Industria de Diseño Textil’s ITX, +0.81% , or Inditex, with its 26 multiple.

Inditex, the parent of Zara, may deserve to be significantly pricier. H&M and Inditex are “a world apart” in their prospects, Barclays analysts offer in a recent note. Barclays puts an Underweight rating on the Swedish company and an Overweight rating on the Spanish retailer. H&M has grown mainly through opening new stores as sales deteriorated in key regions, and its profit margins could keep falling, wrote the bank’s Boris Vilidnitsky and Alvira Rao. Meanwhile, Inditex’s margins look defensible, and the market hasn’t given that retailer enough credit for its ability to boost sales per store, they wrote. 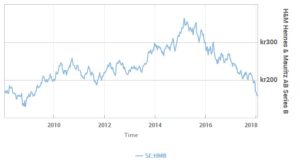 H&M does boast a pretty fat dividend yield of 6%, though management could reduce the payout.

“We would not rule out a dividend cut, perhaps even later this month,” warn Morgan Stanley’s Ruddell and Curry, though they say that’s not the most likely scenario. “Cutting it would give the company much more freedom to reinvent its customer proposition.” An H&M spokeswoman says executives weren’t available for an interview, citing a quiet period before results hit on Jan. 31.

This month, H&M’s stock slid to nine-year lows, and it now has been sliced in half after climbing above SEK360 in 2015. Some shareholders still sound upbeat.

“H&M has invested heavily in its online presence in recent years, and we believe it is better positioned than many in the market appreciate,” wrote David Herro and Michael Manelli, portfolio managers for Oakmark International Fund, which holds H&M shares, in their fourth-quarter letter. The Stockholm-based company’s disappointing fourth-quarter sales were due in part to weakness in its sector, as well as “a fashion miss in H&M’s collection and a failure to get the right product to the right stores.” The retailer has made changes, they note, with a new H&M brand head tackling “fashion and product-allocation issues.”

Even so, investors may want to wait and see if management offers reassurances in the next few weeks that beaten-up H&M is a bargain.