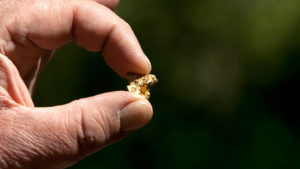 Gold mining stocks lagged behind gains for the precious metal last year, but they could overtake the gold rally in 2018.

“Gold miners have been underperforming gold for the last several years, which is not unusual during a bear market or falling price,” said Peter Spina, president and chief executive officer of GoldSeek.com. “But over the prior few years as gold has moved hundreds of dollars off the low, miners have not led the gold price higher” and instead mostly kept up pace with the gold price.

That could soon change as analysts forecast a further rise in gold, and gold mining stocks start the year on a strong note.

The NYSE Arca Gold Bugs Index HUI, +0.20% which includes some of largest unhedged gold mining stocks, has already gained roughly 2.7% for the year so far. It only rose about 5.5% last year. The Philadelphia Gold and Silver Index XAU, +0.46% has added about 3.6% year to date, after a rise of 8.1% last year.

The gains for mining stocks come as gold futures touched their highest levels in more than four months, with the February contract GCG8, +0.29% settling at $1,339.20 an ounce on Wednesday, after posting a gain of nearly 14% in 2017. The yellow metal has climbed roughly 1.9% this year. 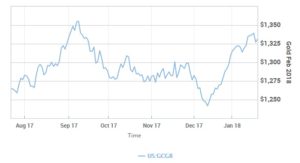 “We see a breakout at $1,400 in gold, which could mean new multiyear highs,” said Jeb Handwerger, editor of GoldStockTrades.com, which offers a newsletter focusing on mining exploration companies. Gold futures haven’t topped $1,400 since 2013.

A decline in the value of the U.S. dollar has recently helped boost dollar-denominated prices of gold, but Handwerger pointed out that “many investors have been diverted away from mining into much more speculative areas like blockchain and cannabis.”

“Even investment conferences and newsletter writers who were once gold bugs are now cryptocurrency gurus,” and this is very similar to 1999 when gold bulls became dot-com gurus,” he said. “Eventually, we will have another gold rush possibly even bigger than the late 70s but possibly more like the 30s.”

Given all that, he expects “a lot of institutional capital to return and significant short covering that could cause the price to gap to $1,750.” Gold futures haven’t settled above that level since 2012.

And “the miners boom after gold makes a sustainable move,” said Handwerger.

Even at a $1,400 gold prices, he expects junior gold miners, which are exploration companies in search of new gold deposits, to soar. That “could set off a huge [merger and acquisition] push by the major [gold mining companies] to replace their reserves, which have been in decline,” Handwerger said.

Handwerger believes investors should “avoid the royalty companies in this part of the cycle”—those that help fund exploration and production projects—and instead look at some of lowest-cost producers, especially in Nevada, like Barrick Gold Corp. ABX, +0.63% Kinross Gold Corp. KGC, -1.18% and Newmont Mining Corp. NEM, +0.59%

He said he doesn’t personally own shares in the large producers, but does invest in the “developers and explorers with proven management teams and world class assets backed by top sponsors, preferably below the $50 million market cap, that may eventually get bought out by the majors.”

GoldSeek.com’s Spina also had an upbeat view on gold mining and exploration companies. He said he has been taking money out of cryptocurrencies and investing into the miners and juniors.

“There is so much upside [and] risk-reward is very appealing, and I expect them to significantly outperform gold and silver prices in this next leg higher,” he said.

Among his picks, Spina favors Golden Star Resources Ltd. GSS, -0.62% “which has done a lot of work to focus on making profits rather than mining as many ounces,” and being smart with their investments into underground operations, he said.

“They have outperformed on the past legs higher versus other gold miners, and expect this to continue this year as well,” said Spina.

PrevPreviousU.S. Border Guards Can Search Your Phone: Here Are Some Details On How
NextAmazon hikes monthly Prime membership price by 20% in U.S. but not in CanadaNext