As General Electric Co.’s stock falls further behind its peers to fresh multiyear lows, the risk of it snapping its record 110-year run within the Dow Jones Industrial Average keeps increasing.

The struggling industrial conglomerate’s stock GE, -3.04% plunged 3% Friday to the lowest close since Dec. 2, 2011, in the wake of the company’s disclosure this week of massive losses in its legacy insurance business. 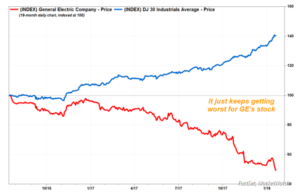 Price is important for the keepers of the 121-year old index, because the index is price weighted, meaning the higher the price of the stock, the more influence it has on the index’s price. For example, a 1% move in GE’s stock has about a 1-point effect on the Dow, while a 1% move in Boeing shares moves the Dow by about 23 points.

In contrast, many other benchmark indexes, like the S&P 500 index SPX, +0.44% are market-capitalization weighted, meaning the more valuable the company, the more influence it has on the index’s price.

Although there are no hard and fast rules regarding price for current and future Dow members, David Blitzer, chairman of the index committee at S&P Dow Jones Indices, has previously told MarketWatch that the committee prefers the “ratio of the highest to lowest price be less than 10-to-1.”

There are currently eight Dow stocks with prices that are more than 10-times the current price for GE shares. It’s a lot easier to change one component than to change eight.

“At each meeting, the Committees review pending corporate actions that may affect index constituents, statistics comparing the composition of the indices to the market, companies that are being considered as candidates for addition to an index, and any significant market events.”

The committee said it reserves the right to “revise” index policy covering rules for selecting companies, the treatment of dividends, share counts or other matters.

A possible break up of the company would give committee members more fodder to remove GE for a third time.

GE was replaced in September 1898 by U.S. Rubber, and rejoined the index seven months later.

On April 1, 1901, GE was replaced again, until it was added back in for good on Nov. 7, 1907, to replace Tennessee Coal & Iron. None of the other fellow Dow members at the time remain today.

The most likely month for Dow changes since November 1907 has been March, with seven changes during that month, followed by January with six changes and April, August and September with five changes. The least likely month for a change has been February, with just two changes.

While getting booted from the Dow would be an unfortunate turn of events for GE, which ended the year as the most valuable U.S. company as recently as 2005, but it may not be such a bad thing for the company’s shareholders.

Shares of the last several companies that were removed from the Dow outperformed their replacements by wide margins in the year after the changes were made.

PrevPreviousCarving Out The Science Behind Competition-Grade Ice at Lake Louise’s Iconic Ice Sculpture festival
NextHere’s Why You Shouldn’t Close Old Credit Cards, Even If You Don’t Use ThemNext