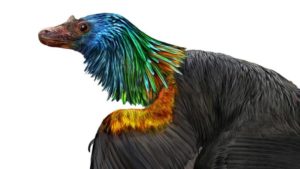 The fossilized remains of a tiny duck-sized dinosaur with rainbow feathers have been discovered.

Dubbed Caihong juji, which is Mandarin for ‘rainbow with a big crest,’ the dinosaur discovery was revealed in a paper published in the journal Nature Communications.

The dino, which had a bony crest on its head, likely sported iridescent feathers on its head, wings and tail, according to paleontologists. The bright feathers were probably similar to a modern hummingbird’s feathers.

“When you look at the fossil record, you normally only see hard parts like bone, but every once in a while, soft parts like feathers are preserved, and you get a glimpse into the past,” explained Chad Eliason, a postdoctoral researcher at The Field Museum and one of the study’s authors, in a statement. “The preservation of this dinosaur is incredible, we were really excited when we realized the level of detail we were able to see on the feathers.” 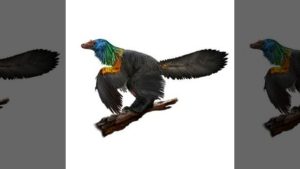 The specimen was found by a local farmer Qinglong County, Hebei Province, China and acquired by the Paleontological Museum of Liaoning in February, 2014.

Eliason, who began work on the project as a graduate student at the University of Texas at Austin, explained that experts analyzed Caihong’s melanosomes, the parts of cells that contain pigment. “To find the color of Caihong’s feathers, we compared its melanosomes with a growing database of thousands of measurements of melanosomes found in modern birds,” he said.

Color is not only dictated by pigment, but by the structure of the melanosomes that contain the pigment. “Hummingbirds have bright, iridescent feathers, but if you took a hummingbird feather and smashed it into tiny pieces, you’d only see black dust. The pigment in the feathers is black, but the shapes of the melanosomes that produce that pigment are what make the colors in hummingbird feathers that we see,” said Eliason.

The dinosaur is the earliest-known animal with asymmetrical feathers – a feature that modern birds use for steering in flight. Caihong, however, couldn’t fly – its feathers were probably used to attract mates and keep warm.

The bony crest on Caihong’s head is also noteworthy when combined with its feathered features. “This combination of traits is rather unusual,” said study co-author Julia Clarke of the University of Texas at Austin, in the statement. “It has a velociraptor-type skull on the body of this very avian, fully feathered, fluffy kind of form.”

The international team that worked on the Caihong project was led by Dongyu Hu, a professor in the College of Paleontology at the Shenyang Normal University in China.

Caihong is not the only dinosaur making headlines. In a separate announcement, paleontologists recently revealed the discovery of a new turkey-sized dino species in southeastern Australia.