How an Unusual Ice Pattern Formed in the Northumberland Strait 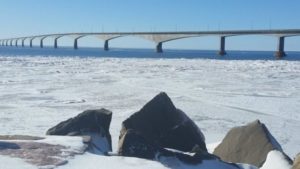 A picture of an ice formation in the Northumberland Strait is fascinating viewers on social media — and for good reason, according to the Atlantic Canadian Coast Guard.

The picture was taken by a P.E.I. pilot flying over the Confederation Bridge. It shows the ice cut into a pattern as it passes under the bridge.

Trevor Hodgson, an ice breaking superintendent with the Coast Guard in the Atlantic region, said specific conditions are needed for the ice to form that kind of pattern.

“It’s really cool to actually see nature and architecture form these strange patterns as we’re looking at the environment,” he said.

“Personally I haven’t seen these patterns before, but when you get right down to it, it makes sense.”

Ice is constantly moving in the Northumberland Strait, and it’s not uncommon to see ice moving beneath the Confederation Bridge.

Hodgson said when the Coast Guard sees the ice cut into straight lines by the bridge, it’s typically later in the season when the ice is thicker.

“That causes a bit more pressure on the actual pack so you won’t actually see it forming these squares and breaking a part like [the] photo,” he said.

The difference this year is the thinner ice.

Hodgson estimates the thickness of the ice is only about 15 cm, which means it’s less stable once it passes through the bridge, and therefore cuts into long strips.

“Then the natural currents and wave action are breaking it across their weakest point,” Hodgson explained.

Hodgson said on that particular day, the ice formation had a chance to survive as far as it did because of low winds and “having enough open water for those squares to branch out and spread a part.”

If the winds were greater, the ice strips would be forced to squeeze back together, forming bigger, uneven shapes of ice.

“So it’s definitely come together to form a pretty unique pattern,” he said.

But for those hoping to catch a glimpse of a similar formation this season, Hodgson said, they might have to be patient.

With warmer temperatures and heavy winds, ice has either melted or been pushed back together.

And while temperatures are expected to drop later in the season, Hodgson predicts the ice will likely be too thick to break off in the same pattern until next year.

PrevPreviousThe Hottest Thing in Technology is Your Voice
NextOil Adds to Rally, Heads for Fourth Week of GainsNext