Investors heaved a sigh of relief at the cooler-than-expected inflation data released this week. Although this in no way guarantees that the worst is over, the market is hopeful that October could be the start of a disinflationary trend that could hopefully spill over to next year. The lower-than-expected headline consumer price index (CPI) sent stocks surging, Treasury yields declining, and a weakening in the dollar. The market reactions point to inflation as the top driver of market movements for the year, and a significant factor for consideration for Federal Reserve policy and investment strategy. There was heightened activity in the investment-grade corporate bond primary market even as the broad tax-exempt bond market traded higher.

Over the trading week just concluded, the Dow Jones Industrial Average (DJIA) rose 4.15% while the Total Stock Market Index gained 5.99%. The S&P 500 Index ascended even higher, adding 5.90%, although it was even outperformed by the Nasdaq Stock Market Composite which advanced 8.10%. The NYSE Composite Index gained 4.42% while the CBOE Volatility Index declined 8.27%, a sign of falling risk perception among investors. Furthermore, the S&P 500 Index recorded its best week since June as well as hit its best intraday level in two months. Its largest daily gain since April 2020 materialized after the release of the consumer inflation data on Thursday. Growth stocks, including technology and internet-related shares particularly, benefitted from falling bond yields which typically enhances the perceived value of future profits. An index of nonprofitable tech stocks, where a significant proportion of revenues is supposedly being invested in future growth, surged by more than 15% on Thursday.

The CPI registered an increase of 7.7% over last year, down from September’s 8.2% inflation rate and the smallest annual increase since January. More significantly, core inflation (excluding food and energy) slowed more than expected, adding only 0.3% over the month before and 6.3% from last year, compared to 0.6% and 6.7% in September, respectively. The September increase marked a 40-year high. Among the sectors where prices fell most were used cars and trucks which dropped by 2.4% in October, and apparel and medical services which also pulled back. Bucking the trend was the cost of shelter which continued to keep inflation elevated as it rose by 0.8% in October, its biggest increase in more than 32 years.

Some of the market surge may be owed to policymakers’ pronouncements regarding the economic data. Four Fed officials delivered speeches on Thursday, stating in effect that they believed the pace of rate increases should be tempered and perhaps halt at a lower terminal rate.  A more cautious tone was adopted by Federal Reserve Bank of Cleveland President Loretta Mester when she said that policy should “become more restrictive.” The results of the midterm election on Tuesday also impacted the perception of the economy’s future. Some investors appear to favor a divided government that would restrain new spending and regulation, and therefore welcomed the likelihood of a Republican majority in the House of Representatives and, possibly, the Senate.

It was an amazing week for the precious metals markets. Gold registered its best weekly performance in almost two years, with December gold futures ending the week at about $1.770 per ounce, up by 5.5% from the previous week. Several major factors appear to be driving the new bullish momentum in metals. The top concern remains to be growing fears of a recession as the inverted U.S. yield curve remains at its widest level in 40 years. Another factor influencing the rally in gold prices is the optimistic news that inflation rose at a slower rate than economists expected, possibly signaling that the Fed is close to slowing down further interest rate hikes.

A third factor that is driving the precious metal’s safe-haven appeal is the increasingly chaotic cryptocurrency market. The week took a bad turn for one of the world’s largest crypto exchanges as FTX announced Thursday night that it was filing for bankruptcy. The digital exchange went from a market value of $32 billion to basically worthless in the span of a few days. There was a significant knock-on effect as the 130 corporate entities affiliated with the exchange filed for bankruptcy. The problems in this market are seen to possibly impact broader market conditions.

Covid is once more putting its thumb on the weighing scale of oil prices, but this time in a positive way. The Covid news out of China is encouraging as the government appears to be rethinking its zero-Covid policy and easing some of its Covid restrictions. This development boosts hopes that China’s oil demand could start bouncing back, providing an impetus for oil prices to recover. The announcement of better-than-expected U.S. inflation data has also helped push back a significant oil price decline this week, bringing ICE Brent back to $96-97 per barrel. While coronavirus cases continue to surge in China, reprising and, in some cases, surpassing the 2020 contagion levels, Beijing’s shifting stance on lockdowns towards greater leniency have calmed the ripples in the oil markets and offset fears of a year-on-year drop in oil demand in the country. Although the threat of more bearish news remains, China’s move towards greater openness supports further increases in oil prices. Meanwhile, in the U.S. the Energy Information Administration (EIA) lowered its forecast for 2023 U.S. crude production growth by a significant 21%. The EIA cited inflation and supply chain constraints and expects next year’s increase to be 480,000 barrels per day.

For the report week beginning Wednesday, November 2, to Wednesday, November 9, 2022, the Henry Hub spot price fell by $1.06 from $4.51 per million British thermal units (MMBtu) to $3.45/MMBtu. The closing price was the lowest daily price since December 2021. The price of the December 2022 NYMEX contract decreased by $0.403 from $6.268/MMBtu On November 2 to $5.865/MMBtu on November 9. The price of the 12-month strip averaging December 2022 through November 2023 futures contracts lost $0.205 to $5.146/MMBtu. International natural gas futures prices decreased for this report week. The weekly average futures prices for liquefied natural gas (LNG) cargoes in East Asia decreased by $1.06 to a weekly average of $27.91/MMBtu, and natural gas futures for delivery at the Title Transfer Facility (TTF) in the Netherlands, the most liquid natural gas market in Europe, decreased by less than $0.02 to a weekly average of $33.95/MMBtu.

European shares climbed on the news of slowing U.S. inflation, together with news of better-than-expected results this earnings season by listed firms, thus lifting investor sentiments. The pan-European STOXX Europe 600 Index closed the week 3.66% higher in local currency terms. Germany’s DAX Index jumped by 5.68%, Italy’s FTSE MIB Index rose by 5.04%, and France’s CAC 40 Index climbed by 2.78%. The U.K.’s FTSE 100 Index, on the other hand, slid 0.23% after the release of poor economic growth data eroded gains. In the bonds market, European government bond yields descended from multiweek highs on the back of weaker-than-expected U.S. CPI data that fueled a global rally in bond markets. Germany’s 10-year bond yield settled at a two-week low in response to a broad-based drop in U.S. treasury yields. However, yields remained near recent highs in Italy, France, and Switzerland, in response to still red-hot inflation data in the bloc. Weak gross domestic product (GDP) data in the U.S. weighed with a downward bias on bond yields ahead of next week’s budget. The lower GDP reading in the U.K indicates a shrinking economy and suggests an impending recession.

Japanese stocks rose over the week as the Nikkei 225 Index registered a 3.9% gain and the broader TOPIX Index ascended by 3.3%. Positive investor sentiment in the Japanese markets resulted from the lower-than-expected U.S. CPI inflation figure. This raised hopes that the U.S. Federal Reserve will begin to loosen its restrictive monetary policy and allow for a more dovish stance. The relaxation of coronavirus restrictions in China also contributed to the more optimistic Japanese outlook. The Bank of Japan (BoJ) asserted that it will continue to pursue its ultra-loose monetary policy to support the fragile economic recovery. The yield on the 10-year Japanese government bond fell to 0.23% from 0.25% even as the yen strengthened at about JPY 139.4 versus the U.S. dollar, from around JPY 146.6 towards the end of the week before. The stronger yen appears to be the result of the BoJ’s intervention in the currency markets.

Chinese equities benefitted from a surprise boost following the announcement of better-than-expected numbers in U.S. inflation. For most of the week, however, Chinese bourses trailed most other global markets due to investors’ concerns about new signs of the economy remaining fragile. The Shanghai Composite Index slid by 0.54% for the week. Some relief was provided to property stocks by news of additional support for the troubled housing market. Chinese officials ordered another USD 56 billion in loans to be extended by second-tier banks to developers. For much of the week, continuing concerns were fueled by the number of daily COVID cases reaching above 10,000 for the first time in over a year, posing the possibility of further lockdowns and a postponement of the opening of the Chinese economy. The increase in infection appeared broad-based and included Henan province, where Foxconn’s iPhone assembly plant was kept open but placed in a “closed loop” with workers living on-site. In any case, an announcement of China’s relaxation of its zero-COVID policy appears to have provided the impetus for Friday’s rally. The government is rumored to soon ease travel restrictions and other measures following President Xi Jinping’s reelection. While policy remains firmly in place, for now, Beijing announced on Friday afternoon that mandatory quarantine time for inbound travelers would be reduced, together with testing requirements. 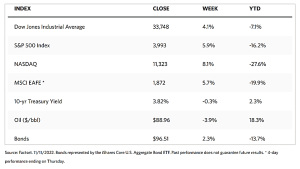