Over the past week, the markets reversed the seeming recovery it appeared to trek just the week before. All indexes are down after the Federal Reserve hiked interest rates another 75 basis points, putting to rest speculation that the central bank was rethinking its hawkish policy and would moderate the pace of its rate hikes. The Dow Jones Industrial Average (DJIA) descended 1.40% from the week before while the Total Stock Market charted a 3.33% drop. The S&P 500 Index mirrored the Dow Jones total stock market, giving up 3.35% from the week before. The Nasdaq Stock Market Composite underperformed the general indices more, plunging 5.65%, suggesting that the technology sector and growth stocks bore the brunt of the sell-down more than the other sectors. The NYSE Composite dipped by 0.63%, and CBOE Volatility (VIX) dropping 4.66%. Typically, the VIX negatively correlates with the S&P 500, so the results this past week appear to run against previous experience, with both indicators falling by about the same percentage.

Hopes were dashed during the week that the Fed may slow down the degree to which they raise interest rates anytime soon. The fed funds rate was jacked up 0.75% at its November FOMC meeting, its fourth consecutive increase by the same percentage points. In just eight months, the fed rate shot up from almost 0% to 4.0%, an unprecedented pace in the history of the U.S. economy. Chair Powell stressed that while the pace of rate hikes may slow as soon as the December meeting, any chance that the rate-hiking may pause is still “very premature.” This shows that the Fed perceives greater risk in pausing and easing prematurely the rate hikes, than in overtightening. The message from Chair Powell provided the greatest incentive for the markets to broadly retreat last week, retracing much of the gains from the rebound last October.

The higher interest rates the country is facing can put downward pressure on consumption as well as directly impact those sectors of the economy that are more sensitive to interest-rate movements. The financial sector which includes credit card debt is the most interest-rate-sensitive industry. Aside from it, the consumer discretionary and housing markets will be impacted by rising interest rates because of the higher cost of commodities and rising mortgage rates.

Reports released also cast a mixed picture of the labor market in October. The Labor Department reported that employers added 261,000 jobs to nonfarm payrolls which outperformed consensus estimates. The department, therefore, adjusted its September jobs figures higher. Running counter to this, however, is the 3.7% rise in the October unemployment rate from 3.5% in September on the back of a decline in the labor force participation rate. While the labor market remains resilient, the unemployment rate is starting to move upward and the year-over-year gains are softening.

Over the summer, many analysts have pointed to pent-up demand building in the precious metals market. Gold prices have been in a consolidation pattern as many investors remain seated on the sidelines as they wait for the market conditions to shift. As gold prices ended up on Friday, it is still a mystery whether the precious metals market is ready to take off or this is again another feint in an unsustainable direction. The Fed’s aggressive monetary policy stance has held down investment demand for gold even as the rising interest rates have driven the dollar to 20-year highs. If Fed Chair Jerome Powell’s speech were any indicator, the central bank believes that inflation is not yet done in its ascent. In the meantime, there is renewed demand for safe-haven investments as the World Gold Council reported solid demand for gold. There is hope for global physical demand for gold to increase by 28% in the third quarter.

Oil prices have been pushed higher lately by a softer currency and speculation that China may be coming out of its Covid restrictions. In the longer term, however, the Federal Reserve’s hawkish pronouncements may exert downward pressure on oil prices. In the much-anticipated press conference held by Fed Chair Jerome Powell, many who expected that the Fed may soon adopt a more dovish stance were disappointed by the announcement of a 75-basis point rate hike, with the terminal rate possibly rising above current expectations. Fears that continued restrictive monetary policies may lead to a recession in the U.S. weighs on oil demand, even though it coincides with the possible opening up to China from years of self-imposed pandemic lockdowns. On the international scene, the Organization of Petroleum Exporting Countries issued a warning of an impending energy crisis. Facing annual production decline rates of four to five percent, OPEC Secretary General Haitham al Ghais called upon the global oil industry toincrease their investments in new oil projects to dispel the possibility of future energy crises, particularly since oil is still a decade away from peaking.

For the report week beginning Wednesday, October 26, to Wednesday, November 2, 2022, the Henry Hub spot price fell by $0.75 from $5.26 per million British thermal units (MMBtu) at the start of the week to $4.52/MMBtu by the week’s end. Concerning Henry Hub future prices, the November 2022 NYMEX contract expired on Thursday at $5.186/MMBtu, lower by $0.42 from the preceding Wednesday. The December 2022 NYMEX contract price increased to $6.268/MMBtu, up, higher by $0.15 from the previous Wednesday to this Wednesday. The price of the 12-month strip averaging December 2022 through November 2023 futures contracts ascended $0.08 to $5.351/MMBtu.

European shares rose for a third consecutive week, which investors may take as a signal by central banks that they may soon curb the pace of interest rate increases. Market sentiments were further boosted by speculation that China may soon lift its zero-Covid policies. The pan-European STOXX Europe 600 Index closed the week 1.51% higher. Major bourses followed this trend. Germany’s DAX Index gained 1.63%, France’s CAC 40 Index climbed 2.29%, and Italy’s FTSE MIB Index ascended 3.34%. The UK’s FTSE 100 Index advanced by 4.07%. European bond yields once more headed toward 11-year highs after the record inflation data for October prompted the European Central Bank to aggressively raise interest rates further. The market response was broad-based, with the yields from French, Italian, and Swiss sovereign bonds making a comeback from recent declines. The 10-year gilt yields in the UK rose after the Bank of England (BoE) raised its benchmark interest rate by 0.75 percentage point to 3% to contain inflation. This is the highest level it has been since 2008. The BoE warned that the UK faces a “very challenging” two-year recession and predicted that inflation would stay above 10% for the next six months and above 5% for the rest of 2023. The central bank forecasts that unemployment may rise to nearly 6.5% by 2025.

In Japan, stock market returns were positive for the week. The Nikkei 225 gained 0.35% and the broader TOPIX Index was up 0.86%. The positive sentiment was spurred by data indicating that Japan’s services sector expanded in October and that China was likely to reopen soon from its pandemic shutdowns. The U.S. Fed’s announcement that its hawkish monetary policy will continue dampened somewhat the positive investor sentiment. The yield on the 10-year Japanese government bond increased to 0,25% from 0.23% at the end of the previous week. The Bank of Japan (BoJ) reiterated its commitment to its ultra-loose monetary policy, but the Governor of the BoJ, Haruhiko Kuroda, hinted at a possible reassessment of the central bank regarding its policy yield curve control to arrest inflation. An increase in inflation beyond the BoJ’s 2% target and a rise in wages may compel the central bank to tweak its monetary policy. The yen weakened to about JPY 148,0 against the greenback, from approximately JPY 147.5 the week before. Authorities have intervened on several occasions to prop up the yen as it came under pressure due to the U.S. Fed’s tightening monetary policy.

China’s equities markets rallied on the expectation that the country was soon to relax its zero-tolerance policy regarding Covid-19. The broad, capitalization-weighted Shanghai Composite Index advanced by 5.3% for the week. Meanwhile, the blue-chip CSI 300 Index, which tracks the largest listed companies in Shanghai and Shenzhen, surged by 6.4% for the week. Reports that surfaced in the just-concluded week stated that China was preparing to exit from its zero-Covid strategy that has adversely affected the country’s economy. In an unverified but widely circulated social media report, high-level officials had allegedly met during the prior weekend at the request of President Xi Jinping to discuss the conditional opening plan aimed at substantially opening by March in the coming year. The yield on the 10-year Chinese government bond ascended last Friday to 2.721% from 2.621% one week earlier. 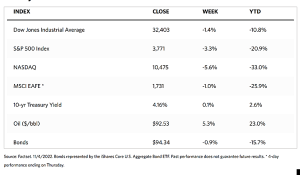