The Dow Jones Industrial Average (DJIA) rose 5.72% and the total stock market index likewise climbed 4.15% for the week. The broad S&P 500 Index rose by 3.95%. The NYSE Composite ascended by 4.61% while the technology-heavy Nasdaq Stock Market Composite increased by 2.24%. The relative underperformance of the Nasdaq compared to the other indexes suggests that value stocks are attracting more investor action than tech and growth stocks. The CBOE volatility index fell by 13.27%.

Big Tech stocks, including Alphabet, Microsoft, Meta, Apple, and Amazon, on average declined 9% on the day of their earnings release and weighed on the markets. The mega-cap technology companies, which accounted for 20% of the S&P 500, exerted an outsized influence on the market averages. Almost 50% of the market cap, represented by 164 of the S&P 500 companies, reported results over the week. The tone of the earnings updates was not one-sided, though. Solid earnings trends were reported by several companies that rely mostly on consumer spending. Three themes dominated these stocks. First, online advertising spending continues to slow, thus weighing on the results of tech and other communication companies. Second, U.S. consumer spending is shifting more to services and less to goods. Third, strong pricing power and improving supply chains are helping support corporate profits.

Some of the improvement in market sentiment appeared to have been driven from beyond U.S. borders. Midweek, the Bank of Canada announced unexpectedly that it will raise rates by only 0.50% instead of 0.75%, sparking hopes that the Federal Reserve will follow its example. The possible continued aggressive monetary policy by the Fed and the consequent strengthening of the U.S. dollar intensified concerns that instability in the global financial system may be triggered. Optimism that the Fed may slow down its rate hikes was boosted by the report by the Commerce Department that the gross domestic product (GDP) growth rose for the first time this year. The third-quarter GDP suggested that the economy expanded by an annualized 2.6%, higher than the consensus estimate of 2.4%. Behind the reading were resilient consumer spending and business investment, together with increased government outlays. These helped offset a deep decline in residential investment, which is the first clear impact of the Fed rate hikes. In September, pending home sales declined by 10.2%, the sharpest monthly fall of the indicator since the onset of the pandemic.

Although the third-quarter GDP was positive, a look at the figures behind the metric reveals a less-than-rosy picture of the economy. The rebound was mostly due to a boost from net trade, where imports fell and exports rose. Since the global economy remains weak and the U.S dollar is nearly 20% higher from this same time last year, the surge in exports that pushed the GDP up this time around will likely fade in future quarters. The first-half GDP data appeared to have overstated the weakness in the economy while the third-quarter GDP overstated its strength. The rest of the picture is not encouraging. Consumption, which is the U.S. economy’s primary driver, slowed from 2% in the previous quarter to 1.4% this quarter. The consumption figure was helped by a rise in service spending, while goods consumption declined. As previously observed, residential investment (housing) sharply declined due to its sensitivity to interest rates. Mortgage rates have more than doubled since the year began. The positive side of this development is that as borrowing costs increase and the housing market cools, inflation can be expected to come down in the coming year.

The week began with gold performing solidly past the $1,650 per ounce price level. By the end of the week, the momentum had vanished. Rumors that the Federal Reserve will signal next week its readiness to slow its hitherto aggressive monetary policy rate hikes, weighing on the price of precious metals. While the sentiment in gold remains somewhat bullish, investors are not convinced that it will decidedly move up anytime soon. Players are likely to remain sidelined until confirmatory signals are seen. For this reason, attention is focused on next week’s FOMC meeting.

The oil markets sprang to life on the back of strong corporate earnings, with strong oil majors maintaining their policy of increasing dividends and ramping up share buybacks. The White House may not approve of this action taken by oil companies ahead of the midterm elections as a surge of optimism has supported the oil prices well, with ICE Brent approaching the psychological barrier at $100 per barrel. The problems that arose earlier this past week, including the widespread dumping of Chinese assets amidst Xi Jinping’s re-election and the ECB’s reluctant interest rate increase, appear to have been discounted for now. In the meantime, concerns arose about the U.S.’s distillate inventories being at their lowest level since 1982 when the EIA started collecting weekly data. It now sits at 106 million barrels, and diesel prices are expected to have a massive upside in the winter months unless the rate of diesel consumption declines.

In Europe, shares rose strongly on expectations that central banks might mitigate the pace at which they increased interest rates. The pan-European STOXX Index closed the week 3.65% higher in local currency terms. The principal stock market indexes likewise surged. Italy’s FTSE MIB Index sharply rose by 4.46%, followed by Germany’s DAX Index which climbed by 4.03%, and France’s CAC 40 Index which advanced by 3.94%. The UK’s FTSE 100 charted a weekly gain of 1.12%. European government bond yields fell across the board. The yield on Germany’s 10-year government bond descended to a three-week low. Likewise, Italian bonds retreated, their 10-year yield falling to a five-week low. UK gilts enjoyed calm trading in the hopes that greater stability may be afforded by a new conservative government. Its 10-year yields dipped to a five-week low. In the meanwhile, the European Central Bank (ECB) again raised its rates by 0.75 percentage point for a second consecutive time. It indicated that it may pursue the same policy to curb inflation that is still perceived to be far too high. The euro fell below parity against the dollar.

Japanese equities ended higher for the week, with the benchmark Nikkei 225 closing above the 27,000 mark, at 27,015. The broader TOPIX index moved essentially sideways and ended at 1,899. Local markets gained early in the week on expectations that the U.S. central bank may adopt a more dovish monetary stance. However, local markets lost some ground later in the week as investors were greeted by domestic earnings reports and announcements by Prime Minister Fumio Kishida that the government will embark on a JPY 71.6 economic stimulus package. Meanwhile, the yen began the week on softer trading despite government intervention. Early Monday, the yen rallied sharply by almost 1.5%, on the back of a surge on Friday that sent the yen surging against the U.S. dollar for the most since March 2020. The currency moved sideways for most of the week, ending at JPY 146 versus the greenback. The benchmark 10-year Japanese government bonds (JGB) dipped sharply late in the week to finish at around 0.237%, from 0.251% where it began the week.

China’s stock markets pulled back on weakened investor sentiment due to new COVID-related lockdowns in several parts of the country. Some Chinese cities intensified their COVID-19 restrictions after the country reported three consecutive days of more than 1,000 new cases nationwide. Data indicated that profits at China’s industrial firms fell at a faster pace in September. The broad, capitalization-weighted Shanghai Composite Index declined by 4.05%. According to reports, major Chinese state-owned banks sold U.S. dollars in both onshore and offshore markets during the week after the yuan’s recent drop. The 10-year Chinese government bond yield descended to 2.691% from the earlier week’s 2.75% amid increasing expectations that global central banks may slow down their aggressive rate hike policies. China’s economy expanded by 3.9% in the third quarter from the same period last year, faster than the 0.4% growth in the second quarter. Exports grew 5.7% from last year in September, higher than expected but still the slowest pace since April. Imports rose by only 0.3%, way below the expected 1.0% growth expected.

This week, the important economic data due for release include the Chicago PMI, job openings, unemployment rate, and labor productivity. 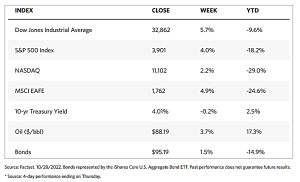