Over the past week, there appeared hints of investor optimism, raising stock market indexes across the board. The Dow Jones Industrial Average (DJIA) gained 4.89% with all sectors up, bringing the total stock market index higher by 4.58%. The S&P 500 Index rose by 4.74%, while the Nasdaq Stock Market Composite surged 5.22%, suggesting that technology and growth stocks outperformed the rest of the market. The NYSE Composite ascended by 3.94%. The CBOE Volatility Index lost 7.28%, suggesting that the fear of traders may be dissipating and more positive investor sentiment may be prevailing in the market.

The improving market sentiment may be attributed to the start of the third-quarter earnings season. Over the past week, several bellwether companies have reported revenues and earnings that exceeded analyst expectations. About 73% have exceeded their earnings forecasts, exceeding the usual 70% average. This has been generally attributed to a resilient consumer base that continues to patronize local goods and services despite economic headwinds. Strong consumer spending with low delinquency rates is observed by big banks that offer retail consumer banking services.

Investors also reacted with optimism to hints that future interest rate hikes by the Federal Reserve will proceed at a more moderate pace. The rise of the S&P 500 marked its best weekly gain in four months. Within it, energy shares outperformed in a show of resilience in the face of an announcement of another release from the U.S. Strategic Petroleum Reserve (SPR). The DJIA recorded its third straight week of gains. The small real estate sector lagged, even as trading remained volatile and active.

As the stock market reaction showed, the third-quarter earnings announcement of listed companies was better than expected. These were the results of business activity covering the quarter ending on September 30, however. Moving forward, higher interest rates may have a lagged impact on the real economy. Earnings may therefore be expected to soften in the future, especially in the coming year. Some downward adjustments in 2023 earnings growth may weigh on future economic expectations. The key to sustainable improvement in the economy is for inflation to recede significantly. Globally, central banks have signified their intention to continue raising interest rates until clear and consistent evidence of falling inflation materializes.

Economic reports during the week provided mixed signals concerning the depth by which Federal rate hikes are cutting into growth. The focus of a marked pullback on Wednesday’s bourses was the weak housing market following sharp declines in housing starts and mortgage applications. Simultaneous with the market reaction is downgrades by analysts of home supply stores Lowe’s and Home Depot. An index of homebuilder sentiment likewise dropped more than expected and touched a 10-year low. However, manufacturing production increased in September by a level that exceeded expectations. Jobless claims for the week ended October 15 also fell much more than forecast to a record low since late September.

The gold market was thrown another lifeline after falling to a new two-year low, on the back of expectations that the pace of interest rate hikes may start to slow. This was announced by the Wall Street Journal, anticipating the move after the Federal Reserve’s monetary policy meeting in November. Gold prices ended the week above the short-term psychological support level of $1,650 per ounce, indicating that it may have broken back up to a higher trading range. Many gold investors have, however, been burned by false hopes and it may take some time before they would venture to one more take long-term positions in the precious metal. So far this year, rallies have been short-lived due to a prevailing regime of persistently high inflation.

This week, President Joe Biden announced a 15-million-barrel SPR release, constituting the remaining volume of the 180 million barrels earlier suggested. The announcement, however, failed to move the oil market. Prices continued to trend sideways in recent trading sessions. The ICE Brent maintained around the $92 per barrel level as a consequence. The U.S. outlook is becoming increasingly bearish in light of the Federal Reserve’s announcement that it will continue to raise interest rates until it gets inflation under control. The bearish sentiment has been offset somewhat by the prospect of China easing its COVID restrictions, leading possibly to higher fuel demand, and a month-on-month decline recorded for OPEC+ crude in October. OPEC’s secretary general, Haltham al-Ghais, has also announced that the oil industry requires $12.1 trillion in additional investments to meet a projected 23% increase in global energy demand by 2045. Most of the increase is expected to come from gas utilization in Asia and Africa.

European shares climbed when UK Prime Minister Liz Truss announced her resignation and the scrapping of her fiscal policies this week. The pan-European STOXX Europe 600 Index closed the week 1.27% higher in local currency terms. The main stock indexes followed this trend. Italy’s FTSE MIB Index surged by 3.04%, Germany’s DAX Index rose 2.36%, and France’s CAC 40 Index advanced by1.74%. The UK’s FTSE 100 Index gained 1.62%. Ahead of the European Central Bank meeting that is anticipated to add another 0.75-percentage point increase in rate hikes, European government bond yields climbed. Yields on Germany’s 10-year debt ascended to their highest levels in the last 10 years. The 10-year gilt yields in the UK surged above 4% during a week of political uncertainty and volatile trading, with data indicating that inflation jumped to a 40-7ear high in September. Furthermore, the Bank of England (BoE) confirmed that n November 1, it will begin selling bonds that it accumulated under the quantitative easing program.

Japanese stocks went through a choppy week of trading and ended lower for the week, mainly due to fears of a global recession and continued currency weakness. During a midweek rally, investors bargain-hunted for undervalued stocks that followed the recent market sell-downs. The Nikkei 225 closed the week at 26,891, 0.7% lower than its close during the prior week. The broader TOPIX index also lost ground by 0.8% to end the week at 1,882. The Japanese markets appeared to be weighed down by U.S. inflation data released during the previous week. Growing expectations that the Federal Reserve will likely announce another 75-basis-point interest hike at its November meeting have had a delayed impact on Japanese bourses. The yen also was impacted after moving below the 150 level against the U.S dollar, a 32-year low. The dollar’s increased strength by Friday’s close saw the yen testing the 151 territory (150.9 JPY/USD), prompting the Japanese Finance Minister, Shun’ichi Suzuki, to pronounce his readiness to take decisive action to protect the yen against sudden sharp moves.

China’s stock exchanges charted a loss for the week after Beijing failed to explain its delayed release of key economic data. The broad capitalization-weighted Shanghai Composite Index slid 1.1% while the blue-chip CSI 300 Index, which tracks the largest listed companies in Shanghai and Shenzhen, dropped 2.6%. Last Monday, the country’s statistics bureau announced that it is postponing the release of third-quarter gross domestic product (GDP) and other key indicators. This included the monthly readings of retail sales, industrial production, and fixed asset investment. The data were scheduled to be released the next day, but the bureau did not give further comment other than announcing the delay, resulting in speculation that the third-quarter GDP would miss the official growth target of 5.5% for the year. Despite the efforts of state banks to support the currency, the onshore yuan fell to its weakest closing level against the dollar since the 2008 global financial crisis. The onshore yuan closed at 7.2494 per dollar on Friday, its lowest close since January 14, 2008.

GDP and inflation data are among the important economic data to be released in the coming week, as well as consumer confidence and consumer sentiment reports. 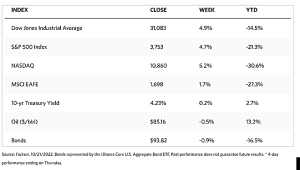