This is the second consecutive week that stocks fell sharply, particularly after the Federal Reserve policymakers announced that short-term interest rates are expected to move up aggressively over the next several months. Indexes this past week dropped precipitously, with the Dow Jones Industrial Average (DJIA) losing 4.00% of its value and the total stock market plunging 5.03%. The broad-based S&P 500 Index dropped 4.65% while the technology-heavy Nasdaq Stock Market Composite dove 5.07%. The NYSE Composite shed 5.33%. The Cboe Volatility Index (VIX), a measure of investor sentiment, became more entrenched below its spring highs but rose sharply by the end of the week. Nasdaq underperformed the other indexes for the second consecutive week and briefly dipped to a level of more than one-third of its January record high.

Stocks began their sudden descent at 2 p.m. on Wednesday following two days of listless trading. The catalyst for the sell-off was the announcement of a 75-basis-point (0.75 percentage-point) federal fund rate hike to a target of 3.00% to 3.25%, the highest level it has reached since March 2008. What was more concerning to investors was the survey of the Fed policymakers’ expectations for further rate increases. The results of the survey pointed to a hike up to 4.50% by the end of this year and remain at that level for most of 2023. The uncertainty of future developments makes it difficult for businesses to plan ahead, creating pessimism in the stock market. A further dampener on investor confidence was Powell’s admission that “no one knows whether this process [of raising rates] will lead to a recession or, if so, how significant that recession would be.”

This week’s market sell-off was influenced by other factors, such as troubling developments in Europe. Not all news was negative, however, as there were some moderately encouraging economic data. Measures of current manufacturing and services activity reported by S&P Global proved surprisingly optimistic. There was an expansion and some acceleration of manufacturing activity (51.8 compared to 51.5, wherein levels above 50 suggest expansion) from August data; the services sector continued to contract, but at a slower pace (49,2 against 43.7). Weekly jobless claims that were released on Thursday slightly increased to 213,000, but this would have been flat if not for the downward revision in the previous week’s numbers. The four-week moving claims average dropped to its lowest level in three months.

The short-term Treasury yields rose briefly in reaction to the latest projections by the Fed, but the week’s most sudden yield increases took place on Thursday as futures market activity elevated. The two-year U.S. Treasury note yield was pushed above 4.10%, which is its highest level going back to October 2007. The benchmark 10-year Treasury note yield briefly rose to 3.77%, its highest point since November 2008. It should be recalled that bond prices and yields move opposite to each other, signaling a drop in bond prices. Investment-grade corporate bonds were relatively resilient ahead of the Fed meeting. After the meeting, however, corporate bonds also weakened, mirroring moves in the stock market and rising U.S. Treasury yields.

Heading into the weekend, sentiment in the metal industry had changed considerably from its bearish direction midweek. There is a perception of optimism building in the gold market as it managed to hold onto its long-term support despite the Federal Reserve raising interest rates by 75 basis points and signaling a terminal rate above 4.5%. Analysts speculate that gold is beginning to look attractive as the prospect of a recession appears to be materializing going into the next year. Fed Chairman Powell reiterated that the central bank will not hesitate to continue its hawkish policy in efforts to get inflation under control. In the meantime, the bears still rule as gold is heading towards a new two-year low as it is unable to withstand the surging momentum of the U.S. dollar, now at a fresh two-year high. It is still heartening to see that gold is in a better place compared to other assets. Gold prices are down less than 2% this week, while oil prices are down more than 7%. Precious metals remain a sturdy safe-haven asset in this period of geopolitical and macroeconomic uncertainty.

As the U.S. Federal Reserve brought interest rates to their highest level since 2008, it further affirmed its commitment to bring down inflation as its main target, overriding any oil-related concerns. During the week’s escalation of the Russian-Ukraine conflict, fears were stoked over Russian supply cuts and their effect on the coming winter’s energy supply. As Russia expects to annex parts of east Ukraine after next week’s referendum, the European Union meanwhile is attempting to assemble another sanctions package that may further curb high-tech exports and implement a group-wide oil price cap. Concurrent with this, concerns are heightened over the forthcoming increase in energy demand by China where cities, which were closed over covid lockdowns in the past months, are once again opening up. For the time being, these developments that may usher in a tightening of the oil supply may counter the downward pressure on oil prices.

For this report week, beginning Wednesday, September 14, and ending Wednesday, September 21, the Henry Hub spot price fell $0.70 from $8.69 per million British thermal units (MMBtu) to $7.99/MMBtu. Regarding the Henry Hub futures prices, the price of the October 2022 NYMEX contract dropped by $1.335, from $9.114/MMBtu at the beginning of the week to $7.779/MMBtu by the end of the week. The price of the 12-month strip averaging October 2022 through September 2023 futures contracts descended from $0.976 to $6.448/MMBtu. International gas futures prices suffered a decline this report week. The weekly average futures prices for liquefied natural gas (LNG) cargoes in East Asia fell by $9.23 to a weekly average of $43.97/MMBtu. The natural gas futures for delivery at the Title Transfer Facility (TTF) in the Netherlands, the most liquid natural gas market in Europe, likewise declined by $4.18 to a weekly average of $56.63/MMBtu.

European shares plunged for a second straight week in response to central banks raising their interest rates sharply to keep up with the Federal Reserve rate hikes. The move is seen to intensify investor fears that a prolonged economic slowdown is imminent. The pan-European STOXX Europe 600 Index closed the week lower by 4.37% in local currency terms, its lowest level in over a year. The major indexes across the board likewise lost considerably. France’s CAC 40 lost by 4.84%, Italy’s FTSE MIB declined by 4.72%, and Germany’s DAX slid by 3.59%. The UK’s FTSE 100 Index lost 3.01% of its value. As stocks fell, yields climbed. The yields on Germany’s 10-year government bonds rose to their highest levels in a decade as central bank rate hikes intensified market expectations for monetary policy tightening at eh European Central Bank. Across Europe, other markets followed as Italian, French, and Spanish yields rose across the board. The UK gilt yields jumped sharply on the possibility of escalating public debt and a steep increase in interest rates after the government cut taxes by the most since 1972 in an attempt to support the economy. The UK pound fell to USD 1.09, its lowest level in 37 years.

In a holiday-shortened trading week, Japan’s stock exchanges closed at their lowest levels over the past two months. The Nikkei 225 Index declined by 2.6%, at one point traversing below the 27,000-mark for the first time since July 19. The Nikkei mirrored losses on Wall Street as a significant rate hike by the Fed further weakened the U.S.-Japan rate differential. For the first time since 1998, the government intervened in the foreign exchange market to support the yen after the Bank of Japan (BoJ) decided to maintain its dovish monetary policy. Japan’s intervention came after the yen fell below JPY 145 per USD. Japan’s Finance Minister, Shunichi Suzuki, observed that while their policy was to let the market determine the exchange rates, the intervention was necessary because “we cannot tolerate repeated rapid fluctuations by speculative moves.” The government intends to closely monitor the market and has promised to take any actions necessary to temper excessive rate swings.

China’s stock markets fell as concerns about a global growth slowdown impacted investor sentiment. The broad, capitalization-weighted Shanghai Composite Index slid 1.2% and the blue-chip CSI 300 Index, which tracks the largest listed companies in Shanghai and Shenzhen, dipped by 1.9%. The week’s close saw the yuan currency fall to a near 28-month low and traded at 7.1066 per U.S. dollar compared to 7.0185 a week earlier. The People’s Bank of China (PBoC), which sets a reference rate each trading day for the onshore yuan versus the U.S. dollar, set the so-called fixing at its lowest level since early August 2020. The onshore yuan can trade up to 2% on either side of the fixing. However, the PBoC has set the fixing stronger than market expectations at every single session for nearly a month, which is indicative of China’s efforts to slow the pace of depreciation. Any significant discrepancy between the market’s expectations of the fixing and the level at which the PBoC sets the midpoint is interpreted by analysts as a signal of how Beijing intends to influence the currency. Aside from the Fed’s rate hikes, the yuan’s slide has also been influenced by China’s surprise decision to lower its key interest rates in August.

Inflation and consumer confidence data are among the important economic data scheduled for release this week. 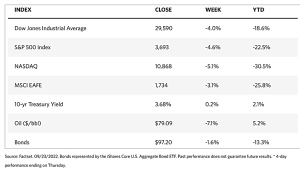