Over the holiday-shortened trading week (markets were closed on Monday in observance of Juneteenth), investors were encouraged by signs that inflation might be moderating, cooling the overheating economy. The sentiment helped stocks regain lost ground and rally sharply. The Dow Jones Industrial Average (DJIA) gained 5.39% while the S&P 500 Index surged by 6.45%, lifting it out of bear market territory. The Nasdaq Composite, which tracks technology companies, rallied by 7.49%. The Russell 3000 index likewise gained 6.53%. Almost every sector registered strong gains, except for the energy sector as oil continued to retreat from its recent highs for most of the week.

Although stocks rallied across the board last week, they remain down almost 20% for the first six months of the year, the worst semi-annual performance of any year since 1970. This was due to a rapid adjustment in interest rates, valuations, and sentiment brought about by the aggressive central bank tightening, inflation concerns, and the combined effect of these two factors on economic growth. On the other hand, the year-to-date sell-off in stocks and bonds has significantly improved returns for long-term investors.

After the economy grew by 5.7% in 2021, the U.S. economy commenced the year from a position of strength. Pent-up consumer demand supported a positive outlook that prevailed after the pandemic headwinds gradually died down. Corporate and household finances were solid and the labor market was robust. Inflation pressures lingered, however, exacerbated by the invasion of Ukraine and the return to lockdowns in China. It started to eat into personal disposable income and savings, forcing the Federal Reserve to signal a shift towards a more aggressive rate-hike strategy. This resulted in an unexpected contraction in the first-quarter GDP, driven by a drag from exports and a decline in inventory spending. Consumer spending, accounting for almost 70% of U.S. GDP, continued to expand at an unrelenting pace. For the second quarter, the real-time estimate of GDP from the Atlanta Fed currently registers 0% growth. In case the second quarter shows a further GDP contraction, this will meet the technical definition of a recession. But an “official” recession is to be designated by the NBER Business Cycle Dating Committee, which at this point does not seem to be the case for the first half of the year, as there does not appear to be any sign of a widespread downturn in economic activity or the labor market.

Moving into the second semester, there will likely be a further deceleration in demand, due to reaction by consumers and businesses to the sharp rise in borrowing costs. The interest-rate-sensitive sectors such as housing and automobiles are already slowing in anticipation of the aggressive measures taken by the Fed, while the broader economy will tend to slow at a lag to the full impact of Fed policy. Mortgage applications are already in a downtrend, even as existing home sales have declined in the last four months, The tight labor market and household savings will continue to support growth. Applications for unemployment benefits (initial jobless claims) have, however, been slowly increasing over the last two months. Companies are also taking a more cautious approach towards hiring under this regime of higher costs and slowing demand. At present, job openings are still twice the number of unemployed workers, but in time this may change as the downside risks to inflation gradually increase. Although the factors driving inflation are beyond the Fed’s control, the sharp rise in rates will continue to impact demand, economic activity, and eventually, inflation.

Due to the Fed’s aggressive response to inflationary pressures, it appears as if the strategy is working and long-term expectations have slightly descended. The University of Michigan released the result of its revised consumer sentiment survey that indicated five-year expectations falling back to approximately its historical average of 3.1% from the previous estimate of 3.3%. This data point has become an important number to watch since apparently it caused the Fed to raise interest rates by 75 basis points during its meeting earlier this month. The inflationary push has appeared to somewhat ease, causing the U.S. central bank to slow future interest rate hikes.  All this activity has not caused any significant changes in the demand for gold and other precious metals. Although the price of gold continues to be well-supported at $1,800 per ounce, there does not appear to be any sense of urgency for investors to rush to buy gold as a safe-haven asset. With so much uncertainty in the economy, the gold market appears satisfied to hold within its present consolidation range, a sign that investors are waiting for the time to strike which, analysts say, may come at the end of the year.

Preliminary estimates of the oil data report by the Energy Information Administration (EIA) point to the largest crude stock build in the past four months, which the EIA still has to explain. The U.S. Federal Reserve’s focus on inflationary measures squeezed speculators out of the Brent and WTI futures contracts. As a result, despite backwardation being nearly as steep as it was in March, oil prices have barely moved this past week, leaving the ICE Brent around the $112 per barrel mark. In Europe, the EU leaders focused on the need to seek alternative supplies during this week’s meeting. The leaders were well aware that it is only a matter of time before Russia shuts down all gas shipments to Europe, thus the need to seek alternative supplies as the continent’s 40% dependence threatens the viability of its energy-hungry industry. Meantime, in the U.S., the EIA data shows that the country’s refinery capacity fell below the 18 million barrel-per-day mark at the start of 2022 (reading was 17.94 million b/d). This is the lowest level of operable downstream capacity since 2014.

Natural gas spot prices descended at most locations for the report week June 15 to 22, 2022. The Henry Hub spot prices slid from $7.72 per million British thermal units (MMBtu) at the start of the week to $6.59/MMBtu by the week’s end. International natural gas spot prices increased during the same week, with the weekly average swap prices of liquefied natural gas (LNG) cargoes in East Asia increasing by $9.20 to a weekly average of $32.29/MMBtu. At the Title Transfer Facility in the Netherlands, the most liquid natural gas spot market in Europe, the day-ahead price increased by $9.38 to a weekly average of $37.07/MMBtu. By comparison, in the same week last year (week ending June 23, 2021), the prices in East Asia and the TTF were $11.88/MMBtu and $10.52/MMBtu, respectively.

In the U.S., prices along the Gulf Coast fell although temperatures remain above normal in the region. Prices in the Midwest fell in line with the national average as temperatures fluctuated. Across most of the West, prices declined as temperatures returned to near normal, while prices in Southern California remained at elevated levels. In the Northeast, prices decreased with the national average. U.S. natural gas supply decreased week-over-week as net imports from Canada fell. U.S. natural gas demand increased as high-consumption regions along the East and West coasts cooled to below normal, even as temperatures remain above normal across much of the central United States. U.S. LNG exports decreased by three vessels this past week compared to the week prior.

Japan’s bourses chalked up solid gains for the week. The Nikkei 225 Index rose 2.04% while the broader TOPIX Index climbed 1.68%. Investor sentiment was supported by continuing expectations that the Bank of Japan (BoJ) will keep its monetary policy ultra-loose, even though consumer prices continue to trend upward and the yen descends to fresh lows. The June PMI data indicated that business activity expanded robustly in the services sector, which also provided a boost to sentiment. However, there remained fears that the U.S Federal Reserve will pursue its monetary policy tightening aggressively, leading to global recession, and muting investor appetite. The yield on the 10-year Japanese government bond dipped to 0.23%, slightly below the previous week’s 0.24%. The yen continues to trek near its 24-year low against the U.S. dollar, closing the week at the upper end of the JPY 134 range.

China’s stock markets rose on hopes of a stimulus following a pledge by President Xi Jinping to roll out more measures to support the economy and reduce the impact of COVID-19. The broad, capitalization-weighted Shanghai Composite Index gained 1.0% while the blue-chip CSI 300 Index, which tracks the largest listed companies in Shenzhen and Shanghai, ascended 1.97%. the yuan was relatively stable at CNY 6.69 per U.S. dollar, from CNY 6.70 the preceding week. The yield on the 10-year China government bond slid to 2.81% from 2.83% the week earlier as a result of the People’s Bank of China (PBOC) injecting CNY 60 billion worth of seven-day reverse repos into the financial system. To avoid further divergence in monetary policy from the strict tightening of other global central banks, the PBOC kept its benchmark lending rates unchanged. If Beijing reduces rates to support a slowing economy, it risks the depreciation of the yuan and acceleration of capital outflows.

In the coming week, important economic data to be released include personal consumption and expenditures, scheduled at 7:30 a.m. on Thursday. 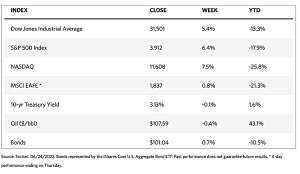