At the forefront of investors’ attention in recent weeks is the volatility in the equities market particularly with the S&P being subjected to its first 10% correction in two years in March. The uncertainty continues to ward off buying interest as the major U.S. stock indexes plunged lower during the week. Growth stocks underperformed their value counterparts as evidenced by the drop in the Russell 1000 Growth Index. Furthermore, the large-cap S&P 500 Index registered greater losses than the S&P SmallCap 600 Index and the S&P Midcap 400 Index. The communication services sector declined more steeply than the other stocks within the S&P 500. Netflix succumbed by more than 35% during the week in response to the dismal report of its quarterly performance underscored by the massive shrinkage of its global subscriber list. Of all the sectors, only the consumer staples sector realized gains.

Growth in business activity appeared to have slowed in April but remains robust, as may be gleaned from the preliminary data for the S&P Global US. Composite PMI Output Index, the indicator that tracks the manufacturing and services sectors. The widely tracked Purchasing managers’ indexes (PMI) registered 55.1 compared to 57.7 in March, which is not too discouraging given that PMI readings north of 50 still signify an expansion in business activity. The April S&P Global Services PMI dropped to 54.7 which is lower than its corresponding level in March, while the counterpart indicator for manufacturing activity expanded. This suggested that as the coronavirus pandemic restrictions were relaxed, new orders for the manufacturing and services businesses increased, and demand strengthened. Both segments of the economy appeared, however, to struggle with the increasing labor and input costs by registering the steepest uptick in output charges ever recorded.

The economy will likely continue to expand despite the pending increase in interest rates, albeit at a slower rate within the 2%-3% range for this year compared to last year’s 6%. Approximately $2 trillion in accumulated savings still backs consumer purchasing power, even as wage growth is still running above 5%.  Household consumption, which accounts for 70% of GDP, is not completely dependent on borrowing. Household debt-servicing costs as a percentage of disposable income continues to remain close to 9%, its historic low in comparison with the mid-1980s (12%) and mid-2000s (13%).

Gold has shown resilience in recent weeks as investors appear to retain an interest in the precious metal despite the market treading a consolidation pattern. The past week showed much promise as the price of the yellow metal tested the $2,000 per-ounce resistance level. It immediately became evident, however, that the precious metal did not have the momentum to break out of this resistance, faced with rising bond yields and a strengthening U.S. dollar. After touching its peak late Monday, gold hit a selling wall and receded 1.7% for the week. All is not lost for gold, however, since it still holds critical support as the U.S. dollar reaches a two-year high. Analysts remain optimistic that gold will continue above the $1,900 level and may test the year-end target price range of $2,000-$2,100 per ounce. As for base metals, copper suffered a significant decline this week from concerns of rising inventories as China’s protracted COVID lockdowns and U.S. monetary tightening threaten to hinder demand.

Supply risks still abound that could propel oil prices higher, nevertheless, some bearish sentiment has permeated the oil markets in the past week as a result of falling demand in China and the likelihood of a global economic slowdown. A slowing economy worldwide is a reason for negative sentiment to weigh crude prices down due to the prospect that the demand for fossil fuel energy may not be sustained. The U.S. Federal Reserve suggested that they may raise interest rates by half a point in the May policy meeting, while Shanghai announced a new round of lockdowns that will extend China’s more recent COVID restrictions. On the other hand, the effect of these headwinds may be offset to some degree by recent moves by the European Union to possibly impose oil sanctions against Russia and Libya. In the meantime, U.S. refiners receive their last Russian cargoes as the April 22 wind-down deadline to halt the purchase of Russian crude and product comes into effect.

Spot prices for natural gas climbed at most locations this report week, April 14 to April 20. The Henry Hub spot price ascended to $7.04 per million British thermal units (MMBtu) from $6.70/MMBtu. Going in the opposite direction were the international natural gas spot prices, with prices at the LNG spot market in Europe falling $2.39 to a weekly average of $30.45/MMBtu at the Title Transfer Facility (TTF) in the Netherlands. Swap prices for LNG cargoes in East Asia likewise declined $3.39/MMBtu to average the week at $29.83/MMBtu. On the domestic front, prices along the Gulf Coast rose with the national average, while prices in the Midwest were volatile during the week. In the West, prices rose with mixed weather along the coast, while prices in the Northeast rose due to increased demand resulting from a late-season winter storm and colder-than-normal temperatures. The U.S. supply of natural gas remained unchanged for the week while total consumption increased. U.S. LNG exports increased by six vessels week-on-week.

In Japan, the stock markets experienced moderate gains for the week. The Nikkei 225 Index slipped 0.04% while the broader TOPIX Index climbed 0.47%. Japan’s consumer price inflation is still lower than other major developed economies since the core consumer price index was up by only 0.8% year-on-year in March. This is the main reason in support of the Bank of Japan’s (BoJ’s) continuation of its ultra-loose monetary policy. Meantime, the yen remained close to a two-decade low against the U.S. dollar. According to the BoJ’s Governor, Haruhiko Kuroda, the adverse effects of a weak currency and the greater difficulty in companies’ business planning need to be accounted for. The yen closed at around JPY 128.49 per USD for the week, compared to JPY 126.44 one week earlier. To defend the upper limit of its interest rate target range, the BoJ bought Japanese government bonds, and it thereafter announced further plans to buy bonds. The yield on the 10-year JGB ended the period unchanged at 0.24%.

Chinese markets lost ground due to investor concerns regarding the economic pullback resulting from the coronavirus lockdowns. Government officials announced the continued imposition of tougher restrictions. The CSI 300 Index fell 4.2% this week. This indicator tracks the largest listed companies in Shanghai and Shenzhen, and this week, it experienced its worst five-day performance since mid-March. The yield on the 10-year Chinese government bond went up to 2.88% from 2.818% the week before. The yuan fell to 6.47 versus the US dollar, the currency’s seven-month low, and down by 1.8% week-on-week. When the Federal Reserve meets in May to announce its expected half-point U.S. rate hike, added pressure is expected to weigh on China’s bonds and currency.

Housing Starts, the Markit PMI Index, and Real Gross Domestic Product are among the important economic data to be released in the coming week. 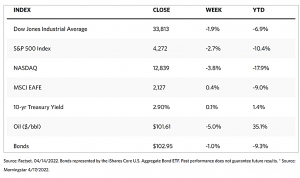