Small-caps and growth stocks led the markets considerably downwards as the manor indexes ended lower week-over-week. Within the S&P 500 Index, sector performance varied widely. Solid gains were charted by the historically defensive consumer staples and health care sectors, while steep losses in information technology, communication services, and consumer discretionary shares. For most of the week, volume was thin, possibly indicating that many investors were sidelined in anticipation of the start of the first-quarter earnings report season. One notable exception was the 27% jump in Twitter shares on Monday following the announcement that Elon Musk had acquired a 9.2% stake in the social media company. Other big stories that moved the markets involved the Federal Reserve policy and the evolving situation in Ukraine. On Tuesday morning stocks suddenly plunged after Fed Governor Lael Brainard announced that the Fed will rapidly reduce its balance sheet during its meeting in May. Brainard is considered one of the policymakers with the most accommodative stance, thus his statement weighed heavily on investors’ sentiments. The Fed’s mid-March policy meeting revealed that the central bank’s balance sheet is likely to be reduced by as much as $95 billion per month, considerably higher than the $80 billion that comprised the consensus estimate. Officials were also prepared to raise rates by 50 basis points or 0.50% in May.

The U.S. faces aggressive tightening monetary policy in the near future, suggesting that the economy will likely slow down as the impact of the withdrawal of Fed support and the rising borrowing costs kick in. Despite these developments, the fundamentals appear to remain resilient. The most optimistic indicator that the economy will remain durable comes from the labor market. In previous economic cycles, recessions were preceded by a rise in unemployment. Currently, however, the ratio of job openings to unemployed people remains at record-highs, and last week a drop in jobless claims to the lowest level since 1968 was announced. These comprise sufficient evidence that suggests consumer incomes will remain well-supported for the remainder of 2022. It is unlikely that the labor market will reverse anytime soon.

There has been a dent in consumer confidence due to high energy prices and widening inflation trends, posing a credible threat to the above-average economic growth for the year. However, savings remains elevated and debt is low. Spending remains robust despite the months-long slide in consumer confidence. Concerning the business side, the manufacturing Purchasing Managers’ Index (PMI) is presently signaling ongoing economic expansion. The PMI is a leading indicator of economic activity, and while its persistence at higher levels remains intact, the March reading fell to its lowest point since September 2020, and new orders and production noticeably slowed, an indication of weakening demand. The weakening of corporate activity may result in slower corporate earnings growth. The growth remains positive nonetheless as analysts’ forecasts remain strong despite the expectation of rising interest rates and the continued geopolitical uncertainty.

Precious metals continue to be impacted by rising bond yields, a trend that has been developing over the past weeks. This week, as 10-year yields surged to a three-year high above 2.6%, gold ends the week with a 1% gain and at the top of its range, near $1,950. The yield breakout suggests that this the possibly the start of the biggest bear market in bonds in 37 years. Traditionally, when bond yields rise, this is a negative indicator for gold since it raises the opportunity costs of holding gold, a nonyielding asset. The yields are trending upwards in anticipation of the Feds launching an aggressive tightening cycle. The hawkish stance adopted by the Fed this week would have traditionally sent gold prices lower, but such a move failed to materialize. Gold prices may move higher as more investors turn to this precious metal as an inflation hedge and safe-haven asset.

There was relative stability in the oil prices this past week. ICE Brent remained constant above the $100 per barrel mark absent any impetus for volatility. Fears of Russian supply disruptions were allayed as a result of the substantial IEA-coordinated inventory release that effectively flattened the futures curves of all three of the major crude benchmarks. The bearish movement was also aided by the extensions of pandemic lockdowns in China, particularly in Shanghai. There remain concerns about the instability that continued disruption may bring to the oil market. The IEA is scheduled to release 60 million barrels of strategic stocks above and beyond the 180-million-barrel stock draw by the US. The IEA countries agreed to this release over the next six months. Japan pledged to release 15 million barrels and thereby takes a principal role in light of the diffident commitments of the other members.

The spot price of natural gas climbed at most locations during the report week from March 30 to April 6, 2022. The Henry Hub spot price rose to $6.25 per million British thermal units (MMBtu) at the end of the week, from where it began at $5.34/MMBtu the previous Wednesday. International spot prices were mixed. Swap prices for LNG cargoes in East Asia fell $0.36/MMBtu for a weekly average of $34.05/MMBtu. In the Netherlands at the Title Transfer Facility (TTF), Europe’s most liquid natural gas spot market, the day ahead prices increased by $1.50 to a weekly average of $36.17/MMBtu.

Along the Gulf Coast, prices increased as temperatures rose. Prices in the Midwest rose together with the general price trend across the U.S. In the West, prices also rose in response to maintenance and warmer temperatures moving into the region. On the other hand, prices in the Northeast increased despite normal temperatures and lower local demand. The supply of natural gas in the U.S. rose slightly during the week as the demand for natural gas is down in almost all sectors. U.S. exports of LNG decreased by two vessels this week compared to last week.

European equities registered modest gains amid concerns about central bank tightening, rising inflation, and the Ukrainian invasion by Russia. The pan-European STOXX Europe 600 Index gained 0.57% in local currency terms. The main continental stock indexes were marginally lower. France’s CAC 40 Index dropped b 2.04% due to election uncertainty, as polls showed that the gap between President Emmanuel Macron’s lead over the contender for the far-right opposition, Marine Le Pen, significantly narrowed.  Italy’s FTSE MIB Index lost 1.37% and Germany’s DAX slid by 1.13%. Trending in the opposite direction, however, is UK’s FTSE 100 Index which climbed 1.75%. Core eurozone bond yields rose in line with U.S. Treasury yields. A sell-off in core bonds was sparked by the imposition of additional sanctions on Russia, and in anticipation of U.S. Fed monetary tightening shortly. Yields were pushed even higher by the minutes of the meeting of the European Central Bank which likewise suggested greater hawkishness. The core markets were broadly tracked by peripheral eurozone and UK government bond yields.

Japan’s key equities benchmarks registered losses during the week. The Nikkei 225 Index dipped by 2.46% and the broader TOPIX Index declined by 2.44%. Although border restrictions were further eased, it failed to moderate the negative sentiment brought by inflationary pressures, the Russian-Ukrainian war, and the hawkish U.S. Federal Reserve. China’s market weakness also weighed on the markets. The yield on the 10-year Japanese government bond increased to 0.23% from 0.21% the previous week. The yen weakened from the prior week’s JPY 122.51 to approximately JPY 124.05 against the U.S. dollar, its lowest point in two years. The IMF downgraded its projection for the 2022 economic growth of Japan from 3.3% year-over-year to 2.4%.

The Chinese equities markets eased somewhat due to the coronavirus lockdown in Shanghai and fears of aggressive monetary tightening by the U.S. Federal Reserve. The broad benchmark Shanghai Composite Index slid 0.94% while the blue-chip CSI 300 Index, which tracks the Shanghai and Shenzhen large-caps, declined by 1.08%. Shanghai’s city-wide, two-stage lockdown that commenced on March 28 was a measure intended to stop or slow the spread of the coronavirus. About 23 Chinese cities are currently under total and partial lockdown, affecting an estimated 193 million people and accounting for 13.5% of the economy of China. The yield on the 10-year Chinese government bond descended this week and ended at 2.806% compared to 2.825% during the preceding week. The yuan depreciated to 6.3625 against the U.S. dollar from 6.3476 one week earlier as the yield gap between the Chinese government bonds and U.S. Treasuries narrowed to a record low.

Core inflation, the Federal budget deficit, and retail sales are among the important economic data to be released this week. 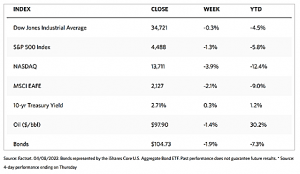