Production to stay in Cda 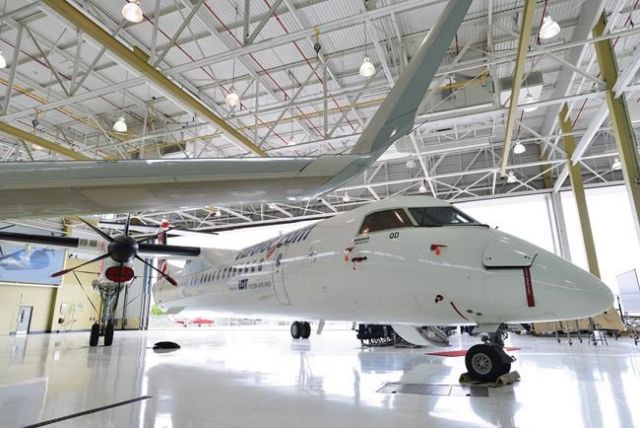 The head of the B.C. company that scooped up Bombardier Inc.’s Q400 turboprop business has pledged to keep all manufacturing already in Canada within the country.

The Q400 series is a “natural fit” for Longview Aviation Capital, chief executive David Curtis said in an interview.

“We like to say, ‘It’s the same colour of paint.’ In other words, the same production processes.”

Bombardier announced on Thursday it is selling the Q400 program to a Longview subsidiary for about US$300 million, on top of the sale of its flight training business to CAE Inc. for about US$645 million.

The Montreal-based company manufactures roughly 28 to 30 Q400 aircraft annually at its Downsview property in Toronto, land that the company sold earlier this year to the Public Sector Pension Investment Board.

Bombardier has a lease on the property until 2021, with a two-year extension option.

“There’s no question, the writing’s on the wall — we’ve go to move,” Curtis said.

“We don’t know yet what we’re going to do, and until we get in there and talk with the folks about what’s the market opportunity, we don’t have any decisions.”

Any future production site will “absolutely not” leave Canadian soil, he said. “We wouldn’t outsource it.”

Longview, whose subsidiary Viking Air Ltd. makes turboprop aircraft such as the Twin Otter, intends to maintain supply chains for the Q400 series that currently stretch from China to Ireland to Mexico, he added.

The deal, which is slated to close in the second half of 2019, positions Longview to more than triple its annual revenue to $1 billion, Curtis said.

Union and opposition leaders in Quebec spoke out against Bombardier’s move Thursday to lay off 5,000 workers, including 500 in Ontario and 2,500 in Quebec, as part of a restructuring plan that cuts more than 12 per cent of its Canadian positions.

Mary Ellen McIlmoyle, president of a Unifor local that represents some of the 2,100 workers at Bombardier’s aerospace wing at Downsview, said her members feel “betrayed.”

“During bargaining in April, the company said they were keeping the Q400,” she said. “It was a huge shock when we found they turned around and sold it.”

Workers’ lack of certainty about the Downsview facility — which makes cockpits and wings, among other components — after 2021 is their “biggest concern,” she said.

“Our members are worried about it being moved to B.C.”