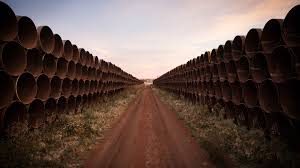 The Canadian proponent of the $10-billion Keystone XL crude pipeline says it remains committed to the project despite a Montana judge’s ruling that it must pass a further environmental review.

The company has received the judge’s ruling and is reviewing it, said TransCanada Corp. spokesman Terry Cunha in a brief email on Friday.

U.S. District Judge Brian Morris put the project on hold on Thursday, ruling that the potential impact had not been considered as required by federal law. Environmentalists and Native American groups had sued to stop it, citing property rights and potential oil spills.

The federal court order blocks a Trump administration permit for the construction of the pipeline. Morris was appointed by President Barack Obama.

TransCanada shares on the Toronto Stock Exchange fell by as much as 2.75 per cent in early trading on Friday.

“This is the world’s longest tug of war, with western Canadian oil prices as the rope,” said Zachary Rogers, a refining and oil markets research analyst at Wood Mackenzie.

“While definitely a major setback in terms of timing, this is unlikely to be the nail in the coffin for Keystone XL. Exact legal recourse options are unclear, but the most likely result is either an escalation through the courts or an additional State Department review and President Trump re-approving the line.”

A shortage of export pipeline space to carry away growing oil production in Alberta has been blamed for recent steep discounts in prices for Canadian oil as compared to New York-traded benchmark oil.

Analysts say as much as 110,000 barrels a day of crude oil is currently being left in the ground in Western Canada rather than being produced and sold at unprofitable prices.

The 1,897-kilometre pipeline would carry as much as 830,000 barrels of crude per day from Hardisty, Alta., to Steel City, Neb., and on through a half dozen states to refineries on the Gulf Coast.

Becky Mitchell, chairwoman of the Northern Plains Resource Council, a plaintiff in the Montana legal action against Keystone XL, said her environmental organization is thrilled with the ruling.