Apple Inc.’s next earnings report will include just 10 days of iPhone XS and XS Max sales and no iPhone XR sales, but Wall Street will be combing the company’s commentary for indications of demand for those new devices heading into the holidays.

In many respects, Apple AAPL, -1.59% is well-positioned for its most crucial season, thanks to a trio of pricey new smartphones meant to appeal to a broad consumer base as well as what seems to be a decent balance of supply and demand. Still, Apple must contend with trade tensions that threaten to hinder Chinese demand as well as an elongated smartphone cycle that’s kept it from meeting unit-sales estimates over the past few quarters. The key test for Apple is whether pricing and a reasonably exciting iPhone slate will outweigh those issues and keep Apple’s valuation higher than $1 trillion.

Bernstein analyst Toni Sacconaghi said he expects Apple to continue to reap the rewards of its pricing tactics, at least for its fourth quarter, which wrapped up in September. So far this year, Apple has been able to beat financial expectations even while selling fewer iPhones than projected, due to a greater mix of expensive devices that helped boost the company’s average selling prices.

“Given that Apple has changed its SKU [stock-keeping unit] strategy and pricing yet again (with an initial launch of the iPhone XS Max and XS), we estimate that ASPs could be significantly higher than consensus,” he wrote. Sacconaghi has projected an average selling price of $800, compared with a FactSet consensus of $748.

Apple investors are always more focused on the future than on the present, and that’s especially true when it comes to a new iPhone cycle. While Wall Street will be looking at Apple’s September-quarter numbers to gauge initial demand for the iPhone XS and XS Max, it will likely be more concerned with what executives have to say about the holiday period when Apple delivers fourth-fiscal-quarter results Thursday after the bell.

“December-quarter guidance will be the most important driver of investor sentiment as it provides the first read on iPhone XR demand,” wrote Morgan Stanley’s Katy Huberty. The XR hit stores on Oct. 26, and is expected to have more mass appeal, due to a suite of attractive features as well as its $749 starting price.

Analysts surveyed by FactSet expect that Apple will earn $4.92 a share on revenue of $92.8 billion for the December quarter, up from earnings per share of $3.89 on revenue of $88.3 billion a year earlier. iPhone unit sales are expected to climb to 100 million from 99 million last December.

Huberty sees “relative strength” for the iPhone XS Max but weaker demand for the iPhone XS, which doesn’t offer much that last year’s iPhone X didn’t. The verdict is still out on the iPhone XR, though Instinet analyst Jeffrey Kvaal wrote during the preorder period that shipment times seemed consistent with what investors saw last year with the iPhone 8, then Apple’s cheapest new phone.

“We consider this mildly disappointing (though only mildly) given conjecture consumer buying activity or telco promotions would be higher with the $749 XR,” wrote Kvaal, who has a neutral rating and $215 target on shares. 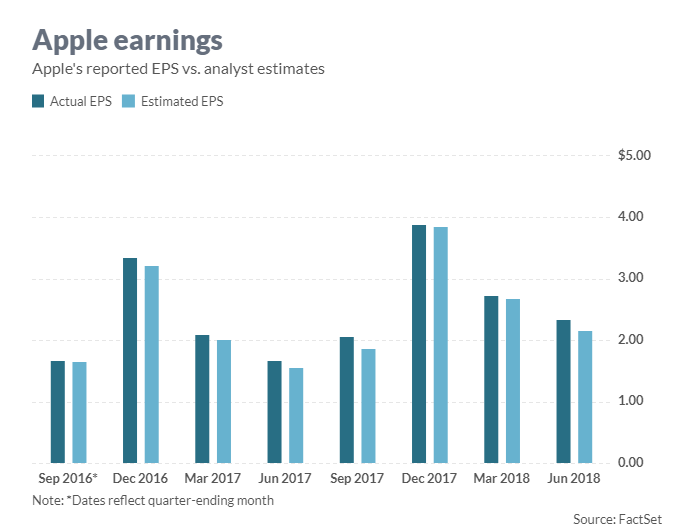 Earnings: Analysts surveyed by FactSet expect Apple to generate earnings per share of $2.78 for the September quarter, up from $2.07 a year earlier. According to Estimize, which crowdsources projections from hedge funds, academics and others, the average estimate calls for $2.81 a share in earnings. 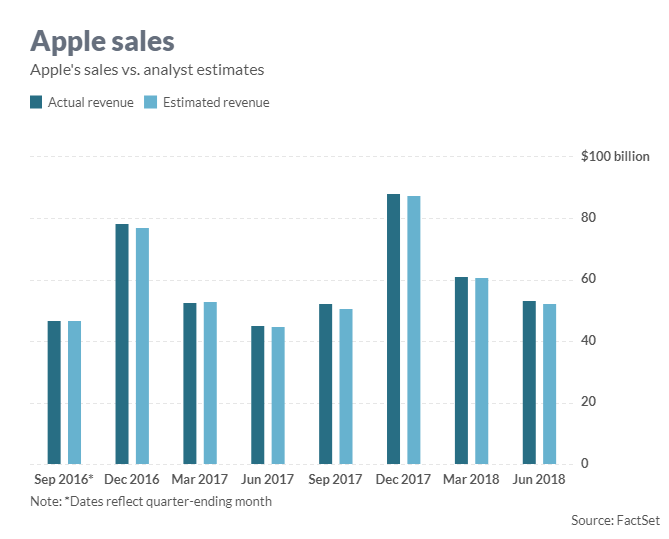 The FactSet consensus calls for September-quarter iPhone revenue of $61 billion as well as 47 million smartphones sold. 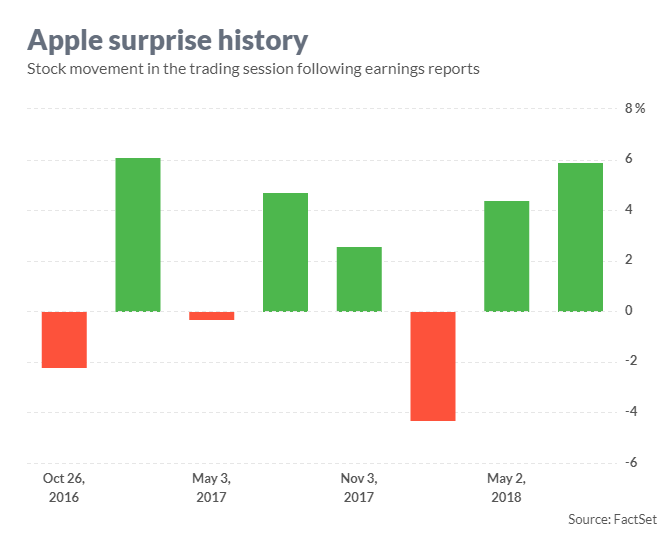 Stock movement: Apple shares have gained following six of the company’s last 10 earnings reports. The stock has risen 37% over the past 12 months, while the Dow Jones Industrial Average DJIA, -1.19% , of which Apple is a component, has risen 5.5%.

What else to watch for

Look for Apple’s commentary on a variety of China-related issues, from tariffs to consumer demand to gaming regulations.

Management may provide information during the conference call about whether tariffs are affecting demand for its products, as well as whether macro issues in China are expected to weigh on consumer willingness to upgrade their smartphones. Apple executives criticized the trade measures, and its Apple Watch was spared at the last minute from a round of tariffs that began in late September. Other Apple products may not have been so lucky, and the company might give further information about what is and isn’t being affected at this time.

There’s also concern about weakening macro data points in China, which might be impacting how eager consumers are to buy new electronics. In addition, a pause on the approvals of new games in China is likely having an impact on the App Store in the country, according to Morgan Stanley’s Huberty.

“Coupled with slower Chinese gaming approvals, decelerating gaming/luxury brand growth in China, and implications of a potentially escalating trade tensions, we see China exposure as the biggest near-term risk,” she wrote. Huberty rates the stock overweight with a price target of $247.

Goldman Sachs analyst Rod Hall commented that the iPhone XR and XS Max are expected to have appeal in China, given their large screen sizes.

“This could at least partially offset negative macro indications though we doubt it completely solves the problem if Chinese consumer demand continues to be weak as we move through the critical holiday buying season,” wrote Hall, who rates the stock neutral and has a $240 target price on Apple’s stock.

He cited “multiple signs of rapidly slowing consumer demand in China” in a recent note to clients.

In general, investors will be looking at the company’s services business, which includes the App Store. Bernstein’s Sacconaghi is particularly interested in Apple’s understated advertising business, which he said could bring in “several billion dollars in revenues” in about three years.

Advertising goes against the company’s strong privacy stance, he said, but Apple already has a small but growing ad business. The company offers search ads in the App Store, and Sacconaghi has said that Apple could get more serious about advertising with the expected launch of a new streaming offering in the near future.

“Here, we would draw a comparison to Roku Inc.’s ROKU, -0.44% platform business, which now generates $17 in annual average revenue per user across 22 million users — $370 million per annum, primarily in ads (about $250 million),” he wrote. He estimated that an Apple streaming service “could have many times more users than Roku” as well as more negotiating leverage. “Currently-unmonetized Apple Maps” might also present ad opportunities, according to Sacconaghi.

Sacconaghi has a market-perform rating on the shares and recently increased his share-price target to $225 from $200.

Executives may be asked to share more about plans for a more comprehensive media service or to provide updates on where the company’s original-content efforts stand.