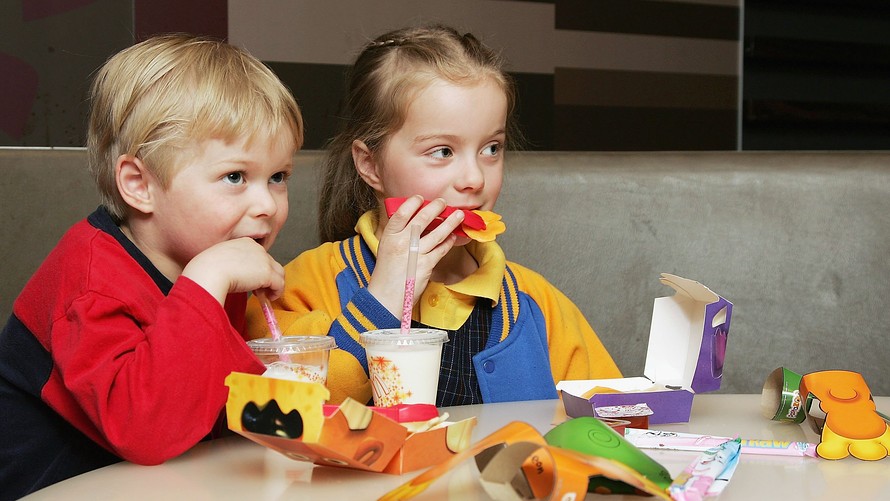 Children still eat unhealthily at fast-food joints, even those who have committed to selling more nutritious food

Children still aren’t eating healthy at fast-food restaurants, even if those chains have committed to offering more nutritious options.

The four largest fast-food companies — McDonald’s, MCD, -0.39% Burger King, Wendy’s WEN, +0.80% and Subway — may have pledged to offer healthier choices on their menus, but almost three-quarters (74%) of children still drink sugary sodas and eat French fries during their visits, according to a study from the Rudd Center for Food Policy and Obesity at the University of Connecticut published Thursday.

Researchers found these fast-food chains automatically include soda and French fries with their kids meals, and market them throughout their establishments on signs and menu boards.

‘Kids smell the French fires and see the soda machine right there, and restaurant personnel are not saying, ‘Would you like water or milk with your meal?’’
—Jennifer Harris, co-author of study on fast food by the Rudd Center for Food Policy and Obesity at the University of Connecticut

The study included three surveys, conducted in 2010, 2013 and 2016, of about 800 parents’ fast-food purchases for their children ages 2 to 11. Healthy Eating Research, a program under the Princeton, N.J.-based public health philanthropic group Robert Wood Johnson Foundation, supported the study. Parents said they were more willing to purchase food for their children at these fast-food chains because of their campaigns for healthier options, the study found.

More parents went to the four largest chains, as well as Starbucks, SBUX, +0.65% Taco Bell and KFC, on a weekly basis (or more often) in 2016, compared to 2013. Almost all parents (91%) said they bought lunch or dinner for their child in the past week at one of the four major chains, compared to 83% in 2013 and 79% in 2010. Parents were also more likely to opt for McDonald’s, though they visited numerous establishments within the week, the study added.

But these chains are saying one thing and doing another, said Jennifer Harris, one of the study’s authors. The restaurants are promoting nutritious options, including fruit juices and apple slices, and have taken sodas off the menu choices for kid’s meals, but they’re not doing enough in the establishment to push healthier food, she said.

“The parents have the ultimate say, but the environment inside the restaurant makes it more difficult for them,” Harris said. “Kids smell the French fires and see the soda machine right there, and restaurant personnel are not saying ‘would you like water or milk with your meal?’”

(McDonald’s, Burger King, Wendy’s and Subway did not respond to a request for comment.)

Children see twice as much advertising for junk food than healthy food, according to research carried out at the University of Adelaide in Australia.

In the meantime, Harris says parents should set children’s expectations for what to order before going to fast-food chains and using the drive-through to avoid children wanting less healthy options.

Children see twice as much advertising for junk food than healthy food, according to research carried out at the University of Adelaide in Australia, published in the Journal of Paediatrics and Child Health. For those who watched 80 minutes of television a day, they saw more than 800 junk food advertisements every year.

Young viewers are more likely to eat junk food when they see it on television, another study found. When people between 11 and 19 years old watched one extra advertisement about junk food a week, they ate 350 more calories from fatty, salty and sugary foods, according to a study of 3,300 teenagers from the Cancer Research U.K.

The four fast-food chains are implementing more nutrition-focused policies. McDonald’s announced on Wednesday changes to its beef burgers, which will now have no artificial preservatives, flavors or colors (except for the pickle). The company said it is also committed to using cage-free eggs by 2025.