20 must-see new cars coming in the next 12 months 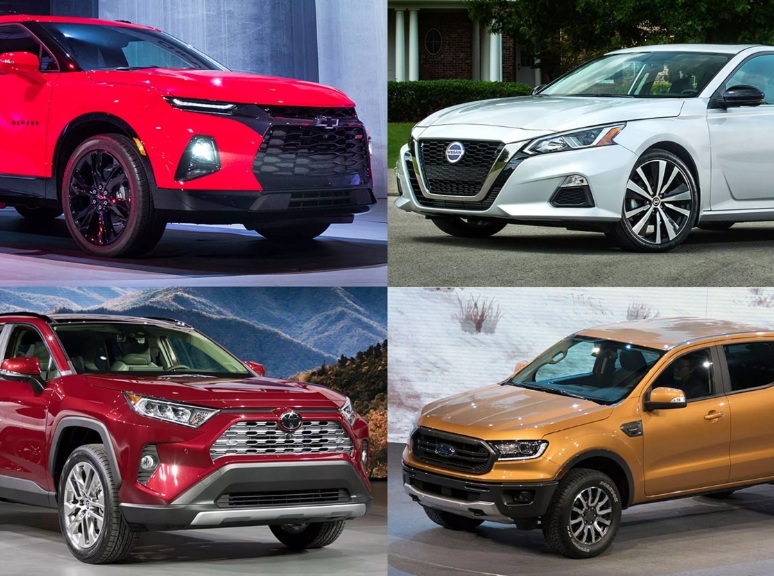 Get ready for an onslaught of important new vehicles, everything from best-sellers and proven moneymakers to the return of a beloved nameplate and established brands moving into market niches.

The emphasis is on comfort and the mainstreaming of advanced features rather than breakthroughs. The 2019 model year isn’t likely to see dramatic leaps in self-driving or electric vehicles, but those technologies will continue to move into mainstream models, increasing safety and fuel efficiency.

Vehicles I expect to go on sale over the next 12 months, through mid-September 2019, include:

Ford Escape and Explorer
Ford’s new emphasis on SUVs will get its first test when all-new versions of the Explorer family SUV and Escape compact hit the market. The Escape and Explorer are the company’s No. 2 and 3 sellers, respectively, behind F-Series pickups.

Earlier versions of the Escape and Explorer defined their classes, racking up big sales and profits.

With SUV sales surging and Ford management under scrutiny, the new Explorer and Escape are vital. If they’re hits, the conversation about Ford will change, easing pressure and boosting morale. If they flop, the vultures circling Dearborn will swoop lower.

Ford Ranger
The Ford Ranger midsize pickup is a close to a sure thing as we get in this life. The old Ranger compact pickup had millions of happy owners, many of whom are eager to see the new, bigger and much more advanced midsize that goes on sale in the first quarter of 2019.

It’ll be loaded with features exclusive in the segment, including a 10-speed automatic transmission and electronics to manage brakes, traction and engine in tough off-roading.

The driver won’t have to do anything but steer around boulders and enjoy the scenery.

Buick Encore
The Encore subcompact SUV pioneered the market for small upscale SUVs when it debuted in 2013. The little SUV was so far ahead of its time that sales struggled in the first year, but it’s become a mainstay of Buick’s model line.

Expect major upgrades in all technical areas in the all-new model, including plenty of driver-assist features that didn’t exist when the Encore made its first appearance. Significantly more upscale interior materials and design would be welcome, too.

Cadillac: Two SUVs and a sport sedan
The 2019 model year could be pivotal for Cadillac. Somehow, America’s signature luxury brand underestimated buyers’ hunger for luxury SUVs, but that changes in a big way starting with the XT4 compact SUV this fall.

The midsize XT5 SUV has been a hit for Caddy, and the brand expects similar performance from the XT4, which will come with a 237-horsepower 2.0-liter turbo, and more room than many compact luxury SUVs.

Speaking of more room, a three-row Caddy SUV expected to be called the XT6 will go on sale next spring.

Competing with popular models like the Audi Q7 and Volvo XC90, the XT6 should become a mainstay of Cadillac sales.

Later in the year, a new sport sedan – also currently unnamed – will arrive to replace the ATS. The compact ATS had great performance and handling, but less passenger and luggage room than key competitors like the BMW 3-series. The new car aims to change that and return Cadillac to its traditional role as a leader in both luxury and room.

Don’t be surprised if Cadillac unveils a new design theme on the XT6 or the new sport sedan.

No, really. This time I mean it. After several false starts in the past, a mid-engine ‘Vette seems nearly inevitable. The new layout moves the ‘Vette’s engine from under the hood where it’s always been to between the passenger compartment and the rear axle. That creates a more even distribution of weight between the front and rear axles, one of the keys to great handling. Ferrari, Porsche and the $465,000 Ford GT use the same layout. The mid-engine layout will changes the car’s proportions for a dramatically different look.

Major challenges include keeping the Corvette relatively affordable – today’s base price is $55,495 – and ensuring the new car is clearly better than the stunningly good 2019 Corvette Stingray.

It’s easier to make the case for the new Blazer midsize SUV. Chevy’s new five-seater will compete with the Ford Edge and Nissan Murano, a pair of stylish and well-equipped SUVs that give some luxury models a run for their money on tech and looks.

The Blazer has the looks nailed. We’ll find out about the tech when it goes on sale early in 2019.

Honda Passport
Honda will jump into the same midsize SUV niche as the Chevy Blazer with a new five-seater expected to be called the Passport.

Nothing is known about the vehicle yet, but it’s expected to share many parts and systems with the larger Pilot.

The Pilot and the smaller CR-V SUV combined to account for 505,174 sales last year, so it’s safe to say Honda expects a lot from the Passport.

The pickup is expected to be called the Scrambler. Built in Toledo, it will use the same platform and many of the same systems as the Wrangler.

No details have been revealed, but it’d be a surprise if the Scramble doesn’t offer a four-door crew cab model. The existence of a two-door is less certain.

The Scrambler will likely come with a full complement of off-roading goodies, making a backcountry faceoff between it and the new Ford Ranger one of 2019’s key comparison tests.

The Wagoneer and Grand Wagoneer large SUVs are more mysterious. They’ll be bigger and have three rows of seats to carry more people than the five-seat Grand Cherokee.

The Grand Wagoneer is expected to be the most luxurious model the Chrysler Group builds, probably equipped and priced to compete with the Cadillac Escalade and Lincoln navigator.

They’re expected to be built in the same Sterling Heights plant that will build the Ram 2500 and 3500 medium-duty pickups. That raises the possibility that — like Escalade and Navigator — they’ll have a truck-type platform.

Fiat Chrysler has already delayed the Wagoneer and Grand Wagoneer several times. It wouldn’t be a shock if they slip again.

Nissan Altima
While other automakers devalue cars and re-emphasize SUVs, Nissan — which has been ahead of the curve and already offers a wide range of SUVs — will introduce a new version of the Altima, one of America’s best-selling sedans.

The 2019 Altima will be the first to offer all-wheel drive, along with other new features, including Nissan Pro Pilot Assist semi-autonomous driving.

The innovative variable compression ratio turbocharged engine that debuted in the Infiniti QX50 luxury SUV earlier this year will deliver 248 hp and “is projected to have a double-digit percentage increase in highway mpg,” according to Nissan.

The Altima is lower, longer and wider for striking looks.

The new RAV4 goes on sale late this year. It’s the only one we know anything about yet. Based on the same architecture as the Camry and Prius, the 2019 RAV4 will have Apple CarPlay and a wide range of safety and driver assistance features including adaptive cruise control and pedestrian detection.

Lincoln Aviator
The elegant Lincoln Aviator SUV gives Ford’s luxury brand a companion to the bigger Navigator, which has been one of 2018’s hits.

In gasoline mode, a twin-turbo V6 provides plenty of power and range for long trips.

The Aviator is based on a new rear-wheel-drive based architecture that is likely to underpin a wide range of future Ford Motor Co. vehicles, probably including the new Explorer.

Audi Q8 and BMW X7
Big, opulent SUVs are the new flagships for luxury brands, and BMW and Audi will cash in on the trend.

Expect prices that flirt with six figures, extravagantly detailed interiors, and every safety and driver-assistance feature German engineers can deliver. While you’re at it, go ahead and hope for simple user interfaces to control smart phones and the big SUVs’ myriad features, but don’t hold your breath.

The SUVs are big, but the Q8 and X7 emphasis is on luxury for the few, not the many. The Q8 seats five, though the X7 is expected to hold up to seven people.

Q8 tech will include remote control parking, brake and steering override if you start to make a left turn in front of an oncoming car, and more.