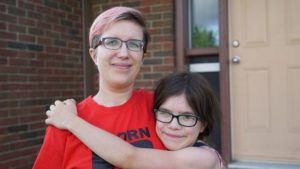 Families with low incomes will qualify for lower internet rates through a new initiative from the federal government and Canadian internet service providers.

Innovation Minister Navdeep Bains announced Wednesday many of Canada’s internet service providers have agreed to provide eligible families with at least 100 gigabytes of landline data service for $10 per month, at a target speed of 10 megabits per second.

“We all agree that all Canadians need access to high-quality, broad-reaching and affordable internet services,” he said. “As with any competitive market, more can be done.”

Norma-Jean Quibell is raising two daughters, ages 9 and 3, with her wife in Bayshore on a single income. She said they had to make tough choices to pay their internet bills and sometimes went without connectivity.

“It affected us the most when it came to finding services. Everything concerning the government is online,” she said.

“It was an issue for communication with schools because a lot of stuff is done online. Social stuff like parenting groups, it’s all done online nowadays. It felt isolating, at points.”

She said they would have to track their internet use closely and it would sometimes lead to tough conversations with nine-year-old Morgan.

“I just need to answer emails this morning or the kids will want to use it to do some homework, and it’s like I don’t want to say no when it’s something concerning homework,” she said.

“At the same time, that overage is going to hit us and it’s going to be hard.”

Quibell became involved with ACORN’s campaign for a low-income internet rate. The organization said it welcomes the federal government’s announcement and hopes it will extend to all individuals earning low incomes.

Rogers and Telus had previously created a similar program for people living in community housing.

The federal government will not be funding the lower rates, but helping companies determine which households qualify for the program — it’s estimated 220,000 households across Canada will be eligible.

According to Innovation, Science and Economic Development documents, Eastlink isn’t participating due to cost concerns. Internet resellers and satellite companies are also not participating, the department said.