Waymo to General Motors: Catch Us if You Can

Fiat Chrysler Automobiles (NYSE: FCAU) and Waymo, the self-driving subsidiary of Alphabet (NASDAQ: GOOG) (NASDAQ: GOOGL), said that they have expanded their partnership with an agreement to add tens of thousands of Chrysler minivans to Waymo’s self-driving fleet.

Waymo and FCA are also looking at incorporating Waymo’s self-driving technology in an FCA vehicle that would be available to retail customers, the companies said.

The news comes a day before FCA is expected to reveal its business plan for the next five years — and just hours after Waymo rival GM Cruise announced a major investment from a high-profile technology fund.

It’s a big deal that tells us more about Waymo’s plan to commercialize its self-driving technology. Let’s take a look. 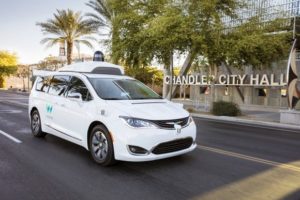 The deal: A whole lot of self-driving minivans

Here’s the deal in a nutshell: FCA will build “up to 62,000” vehicles for Waymo’s self-driving fleet, with deliveries expected to begin late in 2018. The vehicles will be a version of FCA’s well-regarded Chrysler Pacifica Hybrid minivan that was jointly developed by Waymo and FCA engineers in 2016 specifically for self-driving use.

Waymo already has about 600 of the specially adapted Chrysler minivans in its self-driving fleet.

The companies also said that they are “beginning discussions” about a potential FCA-manufactured self-driving vehicle that would be offered to retail customers. No further details were offered, aside from a hint that FCA might license Waymo’s technology.

What this deal tells us about Waymo’s plan

Waymo has said that it will launch “the world’s first self-driving transportation service” in Phoenix, Arizona by the end of 2018, with plans to expand it to other U.S. cities later.

It’s now pretty clear that most of the riders using Waymo’s new service will be riding in Chrysler Pacifica Hybrid minivans. The Pacifica is a good choice for ridesharing duty, with an up-to-date suspension and three rows of roomy seats.

But not all Waymo riders will ride in Chryslers. Riders will have a second choice of vehicle available, at least in some areas: In March, Waymo announced that it will be adding self-driving versions of the new electric Jaguar I-Pace to its fleet as a premium option. Jaguar expects to build “up to 20,000” of the self-driving I-Paces for Waymo over the next two years. 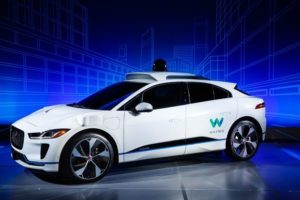 Waymo has also ordered “up to 20,000” self-driving Jaguar I-Paces, which will be a premium option in its new service. Image source: Waymo LLC.

At the time of the Jaguar announcement, Waymo CEO John Krafcik hinted strongly that more vehicle types will be added to Waymo’s self-driving fleet in time. But 62,000 is a lot of self-driving taxis: It now seems clear that, at least at first, Waymo’s service will be based around the Chrysler Pacifica Hybrid minivans.

Does this mean Waymo will beat GM to market?

It seems likely. But it’s not clear how much that will matter.

Waymo and General Motors’ (NYSE: GM) GM Cruise subsidiary are both aiming at the same business segment, automated ridesharing in cities, and both are nearly ready to go to market.

Waymo expects to launch its service in Phoenix by the end of 2018, while GM has said that it expects to deploy its vehicles “at scale” in 2019. Most experts think that Waymo’s self-driving technology is somewhat ahead of the technology being developed by GM Cruise; the idea that Waymo could launch first seems very plausible.

But while GM’s software may lag Waymo’s, GM is no slouch in this race. Its technology is probably ahead of most other potential rivals’, and it has the hardware — a self-driving taxi based on its electric Chevrolet Bolt — ready to manufacture, in a factory that is already up and running producing the (human-driven) Bolt.

The stakes could be high. GM has argued, persuasively, that the first company to deploy self-driving vehicles in ridesharing service at scale will realize a significant “first-mover” advantage. The advantage comes from the fact that these systems “learn” and improve as they gain experience. As GM sees it, the first company to have a large fleet of self-driving vehicles deployed will see its system rapidly improve beyond what new entrants will be able to achieve.

That’s why GM has put a lot of effort into being first to market. But right now, it looks likely to be second.

How much does it matter if Waymo wins this race?

If Waymo launches in Phoenix in November, and GM Cruise launches in (for instance) San Francisco next April, with both companies gradually rolling out their services to other U.S. cities over the next couple of years, will it make much of a difference that Waymo launched first?

My guess is that with respect to GM and Waymo, it probably won’t matter much. In other words, I think there’s room for a second mover that isn’t too far behind to get much of the same advantages that the first mover will realize.

Long story short: It matters a lot for Waymo that it be first. It probably won’t be first by enough of a margin to shut GM out — but the door for other entrants may close pretty quickly after that. We’ll start to find out in a year or so.