Out with the old, in with the new: Behchoko’s 1960s bridge getting a total transformation 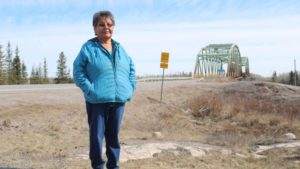 Drive over the Frank Channel Bridge in Behchoko and you’ll bump over dozens of potholes and road patchwork.

Much of the once-green paint has rusted and, in some places, pieces of metal stick out of its sidewalk.

The structure was built in 1960 and is the only roadway connecting the Behchoko neighbourhoods of Rae and Edzo. For residents there, it’s a lifeline to both Yellowknife and the South.

While the Frank Channel Bridge has had repairs over the years, some residents are worried it’s deteriorating. It was supposed to be repaired again last year, but that was put on hold.

Now the Northwest Territories government says it’s going to fix the problem for good; it plans to replace the bridge altogether.

“The cost of rehabilitation compared to the cost of building a brand new bridge was all put into the thought process,” said Kevin McLeod, assistant deputy minister at the Department of Infrastructure.

“Industry really wanted a brand new bridge, and that’s what we’re going to look into in the next year or so.”

Trucks carrying goods between the territory and the South — think food, mining equipment, even houses — use the bridge regularly.

But the bridge is narrow, and its height and width restrictions can make drivers’ jobs tough.

McLeod said that’s why people in the trucking industry have been asking the government to replace it; they’re not the only ones who want change.

Safety ‘a big concern’ for resident

Edzo resident Terri Naskan worries about how safe the bridge is.

The 69-year-old said her grandchildren cross it on the bus every day to go to school, and she wants to know they’re in good hands.

Walking over the bridge last week with a CBC reporter, Naskan pointed to tarnished bolts and beams, and tapped her feet on the bridge’s rusted sidewalk. Despite the beautiful view, she described being up there as scary.

“The safety of all the traffic that goes on there … for me it’s a big concern,” said Naskan. “The structure is old, yes. But then my fear is also like, what’s the erosion like under water. Is it safe?”

She added she wants the community to have a reliable bridge in and out of the community, in the event of an emergency.

According to McLeod, the bridge is safe. In fact, bridges are designed to last between 75 and 100 years, depending on its design, he said.

“The problem with planning and infrastructure, major infrastructure projects, is looking into the future. In 20 years time, will the bridge be able to be as efficient and effective as we want it to be in that term?” said McLeod.

“So I am looking well into the future to make sure that it lasts.”

McLeod wouldn’t reveal how much the new bridge could cost. He did say it’s expected to be modelled after the Kakisa River Bridge.

Behchoko Chief Clifford Daniels once worked as a labourer on the bridge, helping add extra supports when he was a teenager, he said.

He said he and other chiefs are in support of replacing the current bridge with a new one.

“If you do repair it, you’re going to have two years of one lanes, because they’re going to repair one lane, then the following year they repair another lane,” said Daniels.

“A new bridge would really make things a little better.”

Daniels said he is looking forward to meeting with the government to talk more about it.

The territorial government is expected to hold a community engagement meeting with Behchoko residents sometime in June or July.

Here’s a timeline of Frank Channel Bridge repairs, provided by the N.W.T. government:

– 1981: The bridge was upgraded with the addition of steel plates on the girder spans and bracing to the through truss spans.

– 1987: The rocker bearings were re-set, and damaged overhead components were repaired.

– 1994: The concrete deck was rehabilitated.

– 2001: A full inspection was conducted with a snooper truck.

– 2009: Additional repairs were made to the steel grate curb.

– 2013: A full inspection was undertaken with a snooper truck.

PrevPreviousGrandparents Day helps kids learn every older person ‘has a story to tell’
NextCurious what you’re missing when you blink? This new wearable records itNext