What Happened to IBM’s Revenue?

In 2011, International Business Machines (NYSE: IBM) generated just shy of $107 billion in revenue. By 2017, that number had tumbled to $79 billion. As the company painstakingly worked to transform itself, investing in artificial intelligence and cloud computing, revenue declined on a year-over-year basis for 22 consecutive quarters. That streak was finally put to bed in the fourth quarter of 2017.

Where did those $28 billion of sales go? It’s complicated. 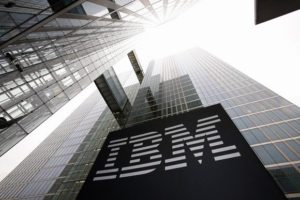 The downside of being a global business

IBM generates the majority of its revenue outside of the United States, operating in more than 175 countries. The company’s various international operations do business in a wide variety of currencies; these currencies are translated to U.S. dollars when IBM reports its quarterly results.

The downside of so much of IBM’s revenue coming from overseas is that the company is exposed to changes in the value of foreign currencies relative to the U.S. dollar. During periods where the U.S. dollar gains value relative to other currencies, the act of translating foreign revenue to U.S. dollars can produce a revenue decline that doesn’t reflect the company’s real performance in those foreign markets.

Currency has become a tailwind for IBM in the past two quarters, boosting revenue. But for much of the past six years, a strengthening dollar has wreaked havoc on the company’s top line.

Currency alone produced a cumulative revenue decline of about 14% since revenue peaked back in 2011, accounting for the bulk of IBM’s lost revenue.

On top of the headwind created by currency, IBM’s revenue has been negatively affected by the sale of certain businesses. Most notably, the company divested its x86 server business and its microelectronics business in 2014.

Sales of businesses hit IBM’s revenue in 2014 and 2015, with a 2.5% impact and a 3% impact, respectively. Divestitures alone were responsible for a cumulative 5.4% revenue decline. Together, currency and divestitures knocked down IBM’s revenue by a little more than 19% since 2011, or in the ballpark of $20 billion.

The amount of revenue that IBM lost unrelated to selling off businesses or currency fluctuations is closer to $8 billion. That’s still not a good result, but it’s not nearly as dire as the unadjusted number. Adjusted for currency and divestitures, IBM’s revenue declines since 2011 have been fairly tame:

IBM’s decline over the past six years looked much worse than it really was.

A return to growth

The good news for IBM investors is that the company is growing again, aided by currency now being a tailwind. IBM produced revenue growth in the fourth quarter of 2017 and the first quarter of 2018, the result of continued double-digit cloud computing growth and a mainframe refresh. The mainframe will become a headwind later this year as the launch is lapped, but IBM’s growth businesses may be able to pick up some of the slack.

IBM expects to produce low-single-digit revenue growth annually as part of its long-term model, driven by 15% to 20% annual growth in its cloud-as-a-service business. The as-a-service business is currently at a $10.7 billion annual revenue run rate, and adjusted for currency, it grew by 20% in 2017. It’s part of the larger cloud business, which produced $17.7 billion of revenue over the past year. The cloud business is part of IBM’s strategic imperatives, which produced $37.7 billion in trailing-12-month revenue.

With IBM’s strategic imperative growth businesses accounting for nearly 50% of total revenue and still growing at a double-digit pace, the company is well-positioned to claw back some of its lost revenue in the coming years.

PrevPreviousBetter Buy: Bank of America Corporation vs. JPMorgan
NextWhen resigning, here’s why you should never accept that counterofferNext