DJI partners up with Microsoft to give drones A.I. superpowers

Drone pilots will soon have the ability to send up a fleet of DJI drones, stream footage from their cameras, and use A.I. technology to spot anomalies in that footage — all from a Windows PC.

During the Build 2018 developer conference on Monday, May 7, DJI and Microsoft announced a partnership to build a software development kit (SDK) to enable drone control from a PC, including live data streaming, rather than piloting the craft from a handheld controller. With the DJI SDK for Microsoft, drones can stream real-time video to a computer, and use Azure IoT Edge artificial intelligence to analyze and interpret the footage, Sam George, director of Microsoft’s Azure IoT Engineering, said during the presentation.

The SDK is designed for industrial use, allowing companies to design a more robust program using artificial intelligence custom tailored to the industry. The agreement allows any Azure developer to add machine learning software to drones for custom applications. For example, during the presentation, a DJI Mavic Air spotted anomalies in pipes, live-streaming the data back to a laptop. The solution could help companies save time and costs on similar industrial inspections, George said. 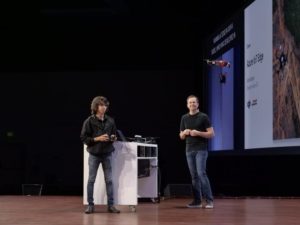 The new SDK will allow developers to design custom applications for different drone uses across multiple industries, including agriculture, construction, public safety, and others. Developers can then release the software based on that SDK for companies within those industries. The Windows 10 integration makes the software easily accessible, DJI says.

Along with clearing a path for developers to create their own apps on Microsoft 10 devices, the SDK will also support third-party accessories mounted on the drone, DJI says. That allows add-ons like multispectral sensors for measuring energy, or even custom actuators (the add-ons with moving parts) to be controlled from the computer.

“Using our new SDK, Windows developers will soon be able to employ drones, A.I. and machine learning technologies to create intelligent flying robots that will save businesses time and money, and help make drone technology a mainstay in the workplace,” DJI President Roger Luo said in a statement.

The DJI SDK for Windows is being released in beta now to developers at Build 2018, with a full launch expected this fall.