How much money is in your checking account? Here’s why it matters—and what it might say about you.

Markets are experiencing another period of volatility this week, and new research suggests checking account customers are doing something that indicates they don’t feel as secure as they would like about the economy. They’re not feeling as safe as some economists would have expected.

Moebs Services, an economic-research firm in Lake Bluff, Ill., analyzed over 12,000 depository call reports and compared them to the Federal Reserve monetary data for 2017. The average consumer checking balance has increased in 23 of the past 30 quarters. 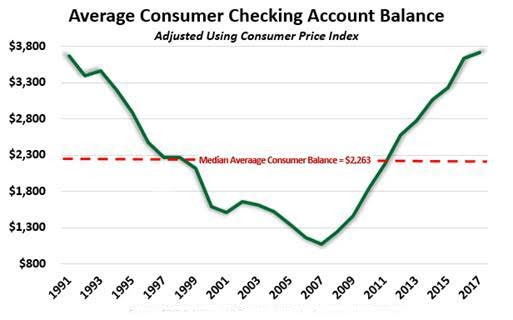 When times are good, Americans feel confident by keeping little in checking, but when times are difficult consumers store money in checking accounts, effectively pulling back on spending on retail and restaurants. “Yet, the Federal Reserve keeps raising interest rates,” he said.

Consumer had the least amount of money in their checking accounts in 2007, when times were good just before the Great Recession. In fact, they had on average less than $1,000 in their account. Since 2008, the checking account customer has been hoarding more money.

And yet credit-card debt hit $1 trillion, so what’s going on? “Wages have not increased,” Moebs said. “Jobs are still hard to find.” Full unemployment, including discouraged workers and those who work part-time for economic reasons, is high at 8% and interest rates are low, he added.

The Dow Jones Industrial Average DJIA, +1.39% has been on another rollercoaster ride this week. The S&P 500 index SPX, +1.28% and Nasdaq Composite Index COMP, +1.71% also experienced volatility as the 10-year year Treasury yield crossed 3% for the first time in four years.

Higher yields make bonds more attractive for some investors, and they’re considered a safer asset than stocks, especially in times of intense market volatility, analysts say. The world’s asset prices, the rates of borrowing and movement in currencies are also influenced by U.S. government bonds.

Saving money is also a sign of a healthy economy

Of course, the most fortunate young Americans have been boasting about their $1 million 401(k) balances on social media before the most recent bout of market volatility began. But there’s a sizeable number who have seen a savings bump in recent years.

The bank asked about the total amount of savings, including bank savings/checking accounts, IRA, 401(k) and other retirement or investment accounts. A nine-year bull market has clearly helped. That’s an encouraging improvement for a generation saddled with record student loan debt.

PrevPreviousWhy Sarepta Therapeutics Is Soaring Today
NextHome listing prices are flat in these 10 markets — is the housing boom finally cooling?Next