Why Garmin Is Thriving in Action Sports as GoPro Falters

I think one of the strangest business dichotomies of the last five years has been the absolute failure of GoPro Inc (NASDAQ: GPRO) as a public company compared to the growing success of Garmin (NASDAQ: GRMN). The companies should have a lot of similarities because both serve niche markets of avid athletes and provide a unique perspective on sports action that others can’t match. GoPro does that with images that capture unique action shots, while Garmin provides GPS and other real-time data to athletes on watches or handheld systems. Heck, they almost have the same distribution model, with similar-looking kiosks in retainers.

In general, niche sports like mountain biking, deepwater diving, and snowboarding are growing in popularity, so both companies should ride the wave of growth higher. Garmin has, but GoPro missed the boat and could learn a thing or two from what Garmin has done well along the way.

Understanding a niche and serving it well

When service niche markets, it’s important to understand your strengths and limitations as a company. GoPro won’t ever make the most popular camera in the world, but it can be a popular action sports camera with sales of 4 to 5 million units per year and a profitable business. Where GoPro went wrong was trying to expand beyond that limited market, forcing designers to make compromises to attract more customers. At different times the company lowered prices, added complicated features that made the product lineup complex, and spent millions to expand its reach beyond a natural niche market (think drones).

Garmin has always seemed more comfortable being a niche market player with GPS products at its core. The company’s product line spans from aviation to marine applications to action sports, but GPS has always been central to its new product offerings and the markets it has expanded into. What you don’t see is Garmin betting its future on products it doesn’t have a competitive advantage in. It never introduced a drone, like GoPro did, and has limited exposure to the activity tracker market that has caused Fitbit so many problems. Instead, it has focused leveraging its GPS and mapping expertise into high-priced smartwatches for athletes and unique GPS-based products for hiking, fishing, and golfing. 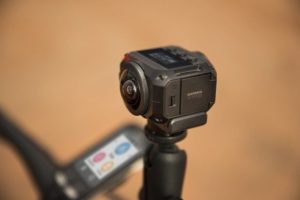 This isn’t to say that Garmin doesn’t explore ways to expand its market or make mistakes along the way; it’s that it doesn’t bet the entire business on each new market it enters. If activity trackers fail, it isn’t going to bankrupt the company because other products will still provide cash flow. The VIRB line of action cameras (shown above) has been released to compete with GoPro, but the business is so small it’s not broken out in financials and only had a minor mention in last quarter’s earnings presentation. Garmin made a small bet on action cameras but won’t go bankrupt if the product doesn’t catch on.

GoPro has been the opposite, betting hundreds of millions of dollars on drones, $105 million on mobile software that mirrors capabilities on most smartphones today, and 360 image editing software company Kolor that serves the nascent 360 video market that has yet to pay off for GoPro.

Cost control is a problem at GoPro

The chart below shows total operating expenses as a percentage of revenue for both Garmin and GoPro. You can see that it shows GoPro’s costs spiraling out of control after the company went public in early 2014.

If a company’s strategy isn’t right and it can’t control costs, it’s tough to make it in the competitive business environment.

With GoPro struggling to survive as a stand-alone company, one reasonable solution for Garmin and GoPro would be to join forces and let Garmin fix some of GoPro’s fundamental problems. GoPro’s market cap is about $700 million today, and Garmin could offer cash or stock as part of a buyout given its $11.0 billion market cap.

With the VIBR line of cameras (shown above), Garmin clearly wants to enter the action camera market and buying GoPro could give it the leading position in the market. Garmin also has some complementary products like watches that could be integrated with GoPro to act as remote controls for cameras, easing a major pain point for action camera users.

Financially, the deal has a lot of potential too. Garmin could slash GoPro’s sales and marketing expenses and leverage its existing infrastructure of retail partners around the world to sell GoPro cameras. If Garmin could increase GoPro’s operating margin to anywhere near the 20% Garmin itself generates, the operating profit could be $240 million on GoPro’s $1.2 billion in annual sales. That could be a great win if the buyout price was around $700 million.

With GoPro floundering with both its long-term strategy and its financials, selling to a company like Garmin could be a way to keep the company’s products alive and maintain some value for shareholders. Garmin has the operational expertise to turn GoPro’s products into a profitable product segment that would fold in nicely with Garmin’s existing product line. For Garmin, the price is right to buyout GoPro and expand its niche business further into action sports.