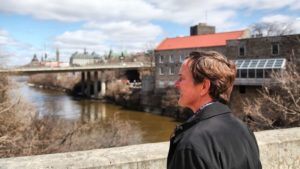 The National Capital Commission’s board of directors has approved a multi-million dollar project to make the ruins of a 19th-century pulp mill near the Portage Bridge more accessible to the public.

According to the report presented to the board on April 19, the $4.4 million project’s goal is to expand access to the Bronson Pulp Mill ruins.

First pitched in 2014, the plan involves stabilizing and refurbishing the ruins in an attempt to “showcase an example of Ottawa’s industrial heritage,” the report said.

While some work has already been done, the next phase of the project involves introducing “publicly accessible interpretive spaces” on the Bronson Dam and nearby Amelia Island, which is currently off-limits.

Those interpretive spaces would tell visitors about the history of the pulp and paper industry, the lumber business and electrical power generation in Ottawa.

There will also be a new pedestrian tunnel built between the ruins and both Richmond Landing and the nearby Mill Street Brew Pub, the report said.

The public is “rarely” granted to the site because Amelia Island is home to Energy Ottawa’s Generating Station No. 2, said Larry Yarema, project manager for structural engineering with the NCC.

“This is a unique situation here in Ottawa. We’ve had our discussions with Energy Ottawa and our plans will ensure that we segregate the operations of the generating station and their staff from the public,” he said.

Yarema said the plan is to begin installing accessible ramps and railings this summer so that people can enjoy the views from the high-level dam deck.

In 2019, the NCC hopes to begin stabilizing the ruins themselves, refurbishing some of the artifacts like the iron stairs and the log flumes and perhaps even reproducing how the mill once worked, he added.

The NCC said revitalizing the site fits into the commission’s plan to expand public access along shorelines and waterways in the region.

The plan also includes the potential for a portion of the revamped ruins to be commercialized — which the nearby Mill Street Brew Pub has expressed interest in — to support other elements like an elevator and washrooms.

The pub could one day collaborate with the NCC on an on-site patio, Yarema said.

“Obviously [there’s] much discussion and work to be done in that regard. But there is a good potential that this could come about in the next couple of years,” he said.

There is the possibility, Yarema added, that parts of the site could occasionally be shut down to the public.

“This is the area where anything that floats downstream [like] logs and debris [collects]. On a regular basis, Energy Ottawa staff will come and clean the grates and take the debris away,” he said.

“And those would be, obviously, occasions when the public access would be constrained so they can get this work done.”

The revitalization project is scheduled to be completed by 2020.