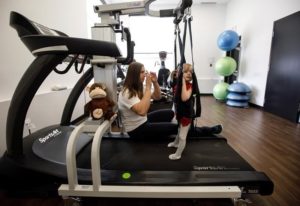 EDMONTON — Evelyn Moore sings the alphabet song as her tiny running shoes plunk down on the treadmill.

The paralyzed 2 1/2-year old is strapped to the machine with a special harness, as two health workers lift her legs up and down to complete each step.

“All done,” the smiling toddler chirps as she’s unbuckled and carried off to continue her exercise routine.

The Edmonton girl made headlines and melted hearts in 2016 with images of her expertly rolling along in a homemade wheelchair that her father fashioned from a foam baby Bumbo seat, a cutting board and bike wheels.

At four-months-old, Evelyn was diagnosed with cancer and a tumour on her spine left her paralyzed below her arms. After several rounds of chemotherapy, doctors announced she was in remission, but the paralysis was permanent. They told her parents she could be fitted for a wheelchair after she turned two.

Her parents didn’t listen and, a few months later, the tot was in her homemade chair.

And now, her blond hair long enough for bitty pigtails, Evelyn is hitting the gym and walking — with the help of machines.

“We aren’t taking the typical route that most parents will, and that’s OK,” says her mother, Kim Moore.

She explains that Alberta funds monthly home visits by occupational and physical therapists, but she wanted more therapy for her daughter.

The repetitive form of rehabilitation has helped clients reach such milestones as learning to speak, signing their names and brushing their hair, she says.

Gill first saw Evelyn on the news in her Bumbo wheelchair and offered to help the feisty girl with so much potential.

By getting Evelyn on a treadmill for nearly an hour three to five times a week, even though she can’t walk on her own, she has gained bladder control, strengthened her immune system and developed muscles, says Gill.

Evelyn can slightly kick her legs.

And she can sit up without using her hands.

“The best part is she doesn’t know it’s working out,” Gill says. “To her, it’s fun. She’s playing with a purpose.

“She’s turning into this sassy little lady. She’s going to take on the world and it’s awesome.”

Nancy Morrow, a neuro exercise specialist who teamed up with Gill to open the centre, says exercise repetition encourages the spinal cord and its patterns to effectively “wake up.”

In addition to the treadmill, Morrow says Evelyn plays around on the floor with toys, takes juice breaks and throws temper tantrums — everything two-year-olds do.

And sometimes she gets strapped into a special mobility harness called an Upsee.

Evelyn gets strapped to the front of her father’s long legs, their four feet tied into the same shoe platform. Brad Moore walks stiffly around the ReYu exercise room, jokingly describing himself a giant Transformer robot as Evelyn plods along, pointing in the direction she wants him to take her.

Using the device, Evelyn was able to walk outside the centre last summer and, for the first time, stuck her nose into a bush. She hadn’t been able to do that before from the seat of her wheelchair. The moment brought her mother to tears.

Brad Moore says it’s amazing to see his daughter’s progress. And even though she now has a real wheelchair, he’s holding onto her Bumbo one as a keepsake.

“One day when she has a better understanding of things, we’ll say, ‘This is where it started.'”