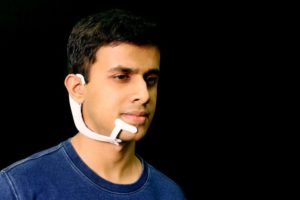 Speaking to voice assistants, no matter how helpful they can be, is still not something the majority of us do on a daily basis. Especially in public. What if you could “speak” to a voice assistant only by thinking about the words you want to say? Considerably less embarrassing. right? That’s the basic concept behind the AlterEgo, a prototype mind-reading wearable designed by researchers at Massachusetts Institute of Technology (MIT).

How it works is extremely clever. OK, it doesn’t actually read your mind, but instead it reads something called subvocalization. This is the name given to tiny, almost imperceptible neurological and muscular movements made when we say words to ourselves, inside our head. Sixteen electrodes on the prototype AlterEgo headset sense these changes, and match the signals to data inside a special neural network, and eventually activate whatever task was requested.

The headset also has bone-conducting speakers — which use your skull to transmit sound into your inner ear, rather than actually putting an earbud in the canal — so you remain aware of the outside world while wearing it. At the moment the headset has 16 electrodes, and wraps around the side of the face, with a connection on the jaw and the back of the neck. However, the team has seen similar results from a model with only four electrodes, meaning it could easily become much smaller.

What’s in your head?

What has the AlterEgo been used for so far? The team has conducted various experiments, including playing a game of chess while “telling” the opponents moves to the wearable computer, and getting potential return moves spoken back. Cheating, yes; but a clear demonstration of what it can do. Additionally, the device can do simple math. Take a look at the concept video to see other applications.

Lead developer on the project, Arnav Kapur, said the idea behind AlterEgo was to build an internal computing platform, that, “feels like an internal extension of our own cognition.” Thesis advisor Pattie Maes added the headset could help us all benefit from smartphones and the internet, without being closed off from the world by looking down at a screen, or wearing earbuds. Thad Starner, a Georgia Tech professor, pointed out how helpful “silent speech” would be in situations where voices can’t be heard — people who work in noisy environments for example — and for those who rely on hand gestures to communicate when sound would give away their position, or even for people who don’t have the ability to speak at all.

For us, internally talking to Siri, Google Assistant, or Alexa, and getting the same results as we would with a vocalized sound could change the way people think about these tools. Yes, the AlterEgo would have to shrink in size to become less intrusive — which do you prefer, speaking out loud to your phone, or wearing the AlterEgo — but the potential is exciting.

Currently the AlterEgo is a prototype used for research, and not available to buy; but it’s possible we could see the technology being investigated here in next-generation devices we use as regularly as we do a smartphone today.