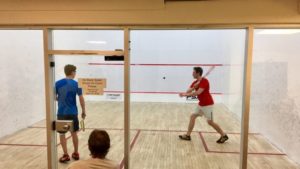 An exciting array of local and international talent is set to take the Professional Squash Association event in Charlottetown by storm this week.

In conjunction with the Vogue Optical Atlantic Canada Open, some of the top players from around the globe will be on the Island for the province’s first-ever professional squash tournament.

Players representing five continents and 11 countries including England, Australia, Egypt and Spain, will vie for the trophy and a share of the $5,000 in prize money.

Also making his first appearance on P.E.I. is American champion Chris Hanson, the 73rd-ranked player in the world.

Mike Buchanan is the top-ranked player in P.E.I. and has been playing squash for more than 20 years.

“Expectation is to just try and hang in as long as you can,” Buchanan said. “Most of these guys do this for a living, so it’s just run, run, run and try and hang in the rallies and hopefully do the best you can.”

Buchanan hopes the exposure will be good for the sport on the Island.

“Hopefully a lot of new players will come in and see this calibre and they’ll want to be enthused with the game and want to play themselves,” he said.

Alongside the professional event, the tournament will also feature competitions that will showcase some of the top talent from around the Maritimes.

In all, 115 players will take part in the competition. One-third of them are female.

A typical match is best-of-five with very few breaks. The president of Squash PEI said it’s a very high-cardio and precision sport.

“There’s so many levels in squash,” said Lester Jinks. “Just when you think you’re brilliant and you’ve got all the shots, you come across somebody and they would chop your game up and beat you.”

Jinks said a lot can be learned from seeing this calibre of play on P.E.I.

“These players have such great skills,” Jinks said. “They hit the ball a little tighter, their drop shots are a little shorter. It’s those little small measures that make a difference.”

And local players are watching the game closely.

“You see a lot of different things when they come here, so you try to build on some of the things that they’re doing and try and incorporate it into your game and hopefully get better,” Buchanan said.