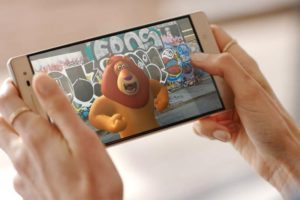 Google’s ARCore was brought to version 1.0 at Mobile World Congress 2018, and since then a ton of developers have taken advantage of it, the company says.

Google just published a blog post highlighting that a hefty 60 apps have been released that use ARCore. Here’s a quick rundown of some of the biggest and coolest new AR-capable apps.

For starters, ’90s kids will appreciate My Tamagotchi Forever, in which you’ll raise your Tamagotchi characters and populate Tamatown — which is a virtual town that can exist in the real world through augmented reality. There’s also Walking Dead Our World, which is kind of like a blend of Pokémon Go and The Walking Dead, allowing you to wander the real world, hide from zombies, and so on.

It’s not just games that are taking advantage of ARCore. Some of the bigger retailers are also jumping on board. For example, through the Pottery Barn 360 Room View app, you can see how furniture would look in your home without having to actually get that furniture in. You’ll be able to do things like change the colors of the furniture, fabric, and so on. eBay is making use of ARCore too — to help you figure out what size box you need. Using the app, you’ll be able to visualize the size of box you need compared to the actual product.

We’ll continue to see more ARCore apps pop up in the near future. For a full list of the new apps, check out Google’s blog post.

According to Google, ARCore works on more than 100 million Android devices, including many flagships. All Google Pixel phones work with it, as well as the Samsung Galaxy S8 and S8 Plus, Note 8, Galaxy S7 and S7 Edge, LG V30, Asus Zenfone AR, and more. Google also announced that it is working with partners to develop more ARCore-enabled phones, including the likes of Samsung, Huawei, Motorola, Sony, and more.

Also in the theme of AR, Google also announced at MWC that it is now expanding the availability of the Google Lens preview. The feature will now be available in Google Photos across all devices with Android or iOS 9 or later, provided users have the latest Google Photos app.

Google Lens is basically Google’s take on image-based search. In other words, you can use the feature to translate text, search for products to buy, and more. Google is also adding new features in the next few weeks — including recognition for common animals, different dog breeds, different plants, and so on.

Eventually, Google wants to bring Lens to Assistant — and it is actually already available as part of Assistant on Google Pixel devices. While it is a handy feature, it will be interesting to see how Google improves it as time goes on.