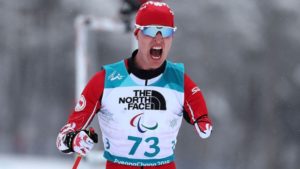 The medal was the fourth of the Games for the 28-year-old from Hartsville, P.E.I., after earning silver and bronze in earlier biathlon events and a cross-country sprint bronze. Arendz now owns six career Paralympic medals.

Arendz’s medal, combined with Collin Cameron and Brittany Hudak both winning bronze, brought Canada’s total to 19 at these Games, tying a national record set in Vancouver in 2010. Canada will surpass that total by virtue of the para ice hockey team reaching the gold-medal game; the team is guaranteed either a gold or silver in that game, which will bring the total to 20.

Cameron added to his Paralympic biathlon medal total with a bronze in the men’s 15-km sitting race. The 29-year-old from Sudbury, Ont., crossed the line in a time of 50:59.1 while incurring only a single shooting penalty to finish just behind Germany’s Martin Fleig and American Daniel Cnossen.

Cameron claimed his first-ever Paralympic medal on the opening day of competition, racing to bronze in the 7.5-km event.

He also had fourth- and fifth-place results in cross-country.

Hudak of Prince Albert, Sask., earned another bronze for Canada with a time of 41:20.7 in the women’s 12.5-km standing race.

It was the 24-year-old’s first Paralympic medal, having finished fifth and eighth in two earlier races.

Chinese skip Wang Haitao needed to be perfect on his last shot of the game, and he delivered with the hammer to give China a 4-3 win and deny Canada a shot at a fourth-consecutive wheelchair curling gold.

It was a back-and-forth affair between Canada and China, but the match drew to a halt in the seventh end after a stone hit Canadian skip Mark Ideson’s chair. As a result of the burned rock, China decided to place the stone in the rings where it hit Ideson’s wheel, which led to protests from the Canadian rink. It appeared the rock was on its way out when it was burned.

Ultimately, the officials placed the stone at the back of the rings and the end was eventually blanked to set up a decisive eighth.

Canada comes up short in snowboarding

PrevPreviousOff-the-shelf smart home devices are a lot less safe than you think, report says
NextWhen he saw a stranger needed a kidney, he thought: ‘Why not me?’Next