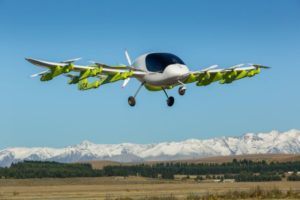 The flying car company led by Udacity CEO Sebastian Thrun and backed by Google co-founder Larry Page is breaking cover with a new deal that will see it test its autonomous electric air taxis with the New Zealand government, with the aim of having a commercial network ready to carry passengers within as little as three years, the New York Times reports.

Kitty Hawk, which has so far only demonstrated its piloted recreational hovercraft (a luxury item designed to help it spur development of its autonomous air taxis) has been testing its autonomous electric passenger aircraft, which resembles a small plane with variable rotors that can go from a vertical alignment for take-off and landing, to a horizontal one for flying like an ordinary plane through the skies.

I’ve spoken to Thrun about the potential of flying ‘cars’ in the past, and the former Google self-driving car project pioneer is extremely bullish on the idea. In fact, he told me he believes that it will leapfrog autonomous cars sometime in the next few years, mostly because when you take to the skies, there are actually fewer problems to solve in terms of building a self-piloting system than when you’re locked to the ground, which naturally means you’re having to deal with pedestrians, other cars and more, with one less dimension to navigate.

Kitty Hawk has been keeping its efforts in New Zealand under wraps by operating its autonomous planes in testing there under the name ‘Zephyr Airworks,’ and by doing the work on this passenger plane under the code name “Zee Aero,” which is the name of what some had suspected was a separate company backed by Page and led by former airline executive Fred Reid.

This aircraft is called “Cora” by Kitty Hawk, and has a 36-foot wingspan and 12 rotors, powered entirely by battery. It has a 62-mile range and room on board for two passengers. Kitty Hawk intends to own and operate the vehicles itself, per the report, kind of like what Ford intends to do with its first fleet of autonomous cars to enter commercial service.

Autonomous flight, and short-hop on-demand aerial transportation, are both big areas of focus for some other high-profile companies, including Uber, which is hosting its second annual conference dedicated to the idea in May, and Airbus, which has been investing in small, electric, autonomous aircraft via its own Vahanna project and through partnerships, including with automaker Audi.

Thrun seemed incredibly confident in the ability of autonomous air transport to make a significant impact sooner than most people think when I spoke to him about Udacity’s flying car nanondegree program, and now it’s obvious why: His own company is making great strides towards fielding an actual commercial service.