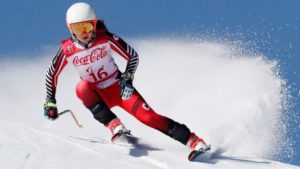 Canada’s Mollie Jepsen won gold in the women’s super combined standing event at the Winter Paralympics in Pyeongchang, South Korea. It’s the first-career gold for the 18-year-old from West Vancouver, who bested Germany’s Andrea Rothfuss with a strong slalom run.

Calgary’s Alana Ramsay earned bronze in the event. Both she and Jepsen previously won bronze medals in Pyeongchang — Jepsen in super-G and Ramsay in downhill.

Fellow Canadians Erin Latimer and Mel Pemble placed seventh and ninth, respectively, in the same event, while Frederique Turgeon did not finish in the first portion of the event.

Canadian downhill gold medallist Mac Marcoux fell in the super-G portion of the men’s visually impaired event and did not finish.

The Hartsville, P.E.I., native missed the first shot on his final interval, but was fast enough to remain on the podium. France’s Benjamin Daviet earned his second gold of the Games, while Ukraine’s Ihor Reptyukh took silver.

Arendz’s career Paralympic medal total now sits at four; he won silver and bronze at the Sochi Games and grabbed silver earlier in Pyeongchang in the 7.5 km event.

Brittany Hudak also missed once during the women’s 10 km standing biathlon, but placed fifth in a quick field.

After dropping both of Monday’s matches and falling to a 3-2 round-robin record, the Canadians seemed to be continuing their losing skid when they fell behind 5-1 after the fourth end.

But Canada managed to claw its way back with two in the fifth end before stealing four in the sixth to take their first lead of the game 7-5.

They didn’t look back from there, adding one in the subsequent end to earn the win.

Canada put their rally caps on once again in their second draw to defeat the U.S. 6-5 in an extra end. With the victory, Canada moved into sole possession of third place with a 5-2 record.

Mark Ideson’s rink went down 3-0 before fighting back to take a 4-3 lead.

In the seventh end, the U.S retook the lead with a successful hit for two before Canada tied it up in the subsequent end.

In the extra end, the U.S. had a draw to the button to win but were unable to convert giving Canada a steal of one and the victory.

The playoff picture is set in the para hockey competition. Canada will take on the hosts South Korea on Wednesday (11 p.m. ET) while the U.S. will take on Italy in the other semifinal on Thursday (7 a.m. ET).

Canada has outscored their opponents 35-0 in round-robin play and seek their first gold medal since Torino.