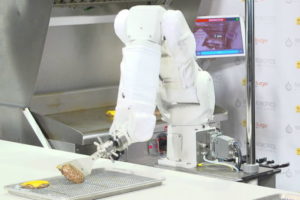 The job of flipping burgers took a big step toward extinction this week as an autonomous robotic kitchen assistant called Flippy started work at a fast food outlet in California.

Designed and built by Miso Robotics, Flippy took up its position alongside human staff at Caliburger in Pasadena on Monday. Every day during the lunchtime shift, the robot will flip burger patties on the grill, remove them when they’re ready, and place them on buns whereupon a human worker will add the extras.

Billed as the world’s first burger-flipping robot, Flippy is essentially a six-axis robotic arm with a spatula on the end.

Clad in its own chef garb, Flippy can flip up to 300 burgers an hour, and, CaliBurger customers will be pleased to know, will cook each one “perfectly and consistently,” according to Miso Robotics.

It does so by using 3D, thermal, and regular cameras to monitor the burgers throughout the cooking process. As the patties cook, its human co-workers can keep track of the progress of each burger on a nearby display (below).

The robot’s technology also ensures that it knows when to switch from using a spatula for raw meat to one for cooked meat, a vital feature that no burger-flipping robot can be without if it’s to have a meaningful future in the fast food industry.

Taking its food hygiene skills to the max, the $60,000 robot can even clean spatulas while cooking, and wipe the surface of the grill with a scraper.

As Flippy made its debut at CaliBurger this week, David Zito, co-founder and chief executive officer of Miso Robotics, said the long-term aim is to “improve working conditions of chefs and line cooks with assistants, not replace them.”

Zito added: “Anyone who’s ever worked in a restaurant knows how hard the work is and the value of extra hands and that’s exactly what we built.”

CaliBurger is planning to install the robot in 50 more locations nationwide, an ambition boosted last month when the project received $10 million of funding, taking Miso Robotics’ disclosed funding to $14 million.

The cash injection will also go toward developing new skills for Flippy so it can perform more functions in a fast food kitchen. When that happens, it might not be too long before we walk into a burger restaurant staffed entirely by Flippy bots, after all, we already have robots running hotels.

PrevPreviousChina’s tests for a global satellite network will start this year
NextB.C.’s Yusuke Kawakami is a world-class guitar makerNext