3 Tech Stocks With a Killer Advantage 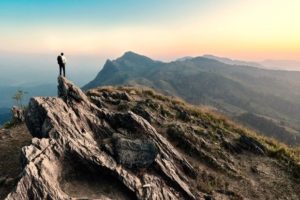 Every investor wants a stock with a killer competitive advantage. Qualities such as a dominant brand, network effects, high switching costs, and scale all give companies advantages over their rivals that allow them to outgrow their peers and take advantage of pricing power. With those advantages, they can reap higher profit margins than they otherwise could.

Netflix has grown to dominate the video-streaming industry thanks to a combination of first-mover advantages, its brand name, and network effects. The leading streamer is just coming off its biggest quarter of subscriber additions ever and now has 117 million members around the world. Netflix continues to buck the conventional wisdom that competitors will restrain it because it’s simply so far ahead of rivals Amazon.com, HBO Now, Hulu, and others. Netflix beats its rivals in membership, library size, and content spending, and it’s quickly catching up to HBO in Emmy awards.

Its brand name is essentially synonymous with streaming, and it has entered the lexicon with phrases like “Netflix and chill.” Most importantly, Netflix has been regularly pulling talent away from traditional networks, signing Glee creator Ryan Murphy away from Fox earlier this month. Its talent lineup is only getting more impressive, as it launched a new talk show with David Letterman at the beginning of the year and signed a number of high-profile comedians, including Dave Chappelle, Jerry Seinfeld, and Chris Rock. Netflix keeps prices low to attract new subscribers, but it has demonstrated its value and the ability to raise prices several times.

As streaming grows, so will Netflix, and its subscription model will ensure that its profit margin expands as it adds new subscribers.

Like Netflix, Match Group has led its industry since the dawn of the internet. The company owns many of the most popular online dating sites, including Match.com, OkCupid, and PlentyofFish, but its most important property these days is Tinder, the swipe-based mobile app that revolutionized online dating. Online dating sites are highly dependent on network effects, which means each additional member makes a network stronger. In online dating, users will be attracted to sites that have the biggest pools of other people to date.

In addition to this advantage, Match also benefits from having dozens of distinct brands and can apply best practices from one brand to another.

Tinder has been especially popular. Its paid subscriber numbers nearly doubled over the past year to 3.1 million, as the company is just starting to monetize the app with new products like Tinder Gold. Match Group stock also rose recently when the company said it would offer a Bumble-like feature that only allows women to initiate chats, showing the power of the brand to co-opt popular features from rivals much in the way that Facebook has taken ideas from Twitter and Snapchat.

Finally, Match’s reliance on user-based content makes it a highly profitable business. It sported a 34% operating margin in its most recent quarter.

Shopify, like the other two stocks on the list, is a leader in its industry, making cloud-based software for online retailers. Shopify’s programs help small and medium-sized businesses track orders, make shipments, and take payments, and its growth may be the biggest testament to the strength of its business. Its revenue growth has been 71% or better in every quarter since it went public in 2015.

Shopify’s leadership in its industry is one of its key strengths, but its biggest may be the switching costs inherent in committing to the software to run one’s business. Shopify charges its customers a monthly subscription fee based on the level of service they have, and once they begin using Shopify, the software becomes intertwined with their business, making it difficult to switch to a different provider. As long as their business is successful, they’re likely to stick with Shopify.

Based on Shopify’s growth rate and number of subscribers, which have now reached more than 500,000, customers seem to be happy with the product. Shopify’s software was strong enough to fend off a challenge from Amazon, which had launched its own Web store in 2010 before shutting it down in 2015, and then partnering with Shopify to make it its preferred provider for its former Web store customers.

With a successful product, high switching costs, and a long growth path ahead of it, Shopify looks like its advantages will only get stronger.

PrevPreviousMoney-saving tips to make your kid a millionaire – it’s as simple as putting £5.50 away every day
NextApple Inc.’s AirPod Product Pipeline RevealedNext