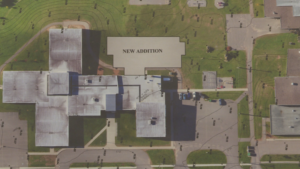 Detailed plans for a multi-million dollar expansion at Stratford Elementary School to address overcrowding in the town’s two schools were unveiled Tuesday.

The two-storey addition on the back of the building will likely allow one or half a grade to move from Glen Stewart Primary to Stratford Elementary — which is right next door — and accommodate growth in the community says Parker Grimmer, director of the Public Schools Branch.

He said the number of students at Stratford Elementary is in the 400s and he could see up to 200 moving over when the project is complete.

“The idea is that there would be room for expansion for several classrooms in addition to the students that would come over in the initial move,” Grimmer said.

There will be another gym and music room along with more space for planning, guidance counselors, EAL students, break out rooms, washrooms and gender neutral washrooms.

Grimmer said there is also the possibility of a court yard or outdoor learning space. Classrooms will be the same size as current ones and the addition will be accessible with an elevator or stairs.

“It creates opportunities at the other school, which can’t be forgotten. Glen Stewart is a school that does have a lot of kids at it as well, over 600 right now,” Grimmer said.

Work is expected to start after this school year on July 1 and continue on through the next school year and finish by August of 2019.

The two-storey design will save on taking up more green space as well, said Foster Millar, project manager for the Stratford school addition. He said a new school would cost about $18 million and the $6.6 million project is a good use of resources.

“This is a good way to increase the number of students you can have … between the two facilities,” Millar said.

The construction area and part of the green space behind the school will be closed off with a fence all around. People won’t be able to go in and out when busses are dropping off or picking up students.

Pick up and drop off areas will change slightly when work starts. Playground equipment will be moved behind the construction zone so students can still use it.

At the information sessions, some parents voiced concerns about schools in the area keeping up with the growing community — even with the expansion.

Denise MacLeod Ling has a daughter at Glen Stewart who will be attending Startford Elementary next year. She believes the plan is the strongest idea of those discussed and likes the idea of preserving green space.

“We know it’s needed. A lot of us kind of had hoped we’d be able to get a whole new school,” she said.

She was also assured about the safety with the fence during construction and is happy about more space, but is concerned about the number of students that could be attending the school.

Grimmer said the current plan addresses concerns brought up in the public consultations during the review of Island schools last year.