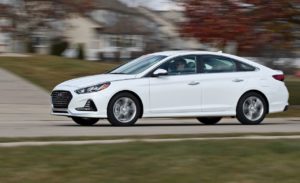 Styling is the decisive factor in many—perhaps even most—vehicle purchases, particularly among coupes and sedans. Which makes Hyundai’s conservative 2015 redesign of its Sonata family sedan all the more mystifying. Hyundai called the new look “more mature.” We assessed it at the time, kindly, as “less dramatic.”

Critical response to the Sonata’s styling retreat did not go unnoticed at Hyundai. That brings us to the 2018 Sonata tested here, rescued from its “more mature” anonymity by a less inhibited facelift. Although the revisions also extend to the rear—new LED taillights, a redesigned bumper, and a new trunklid with an enlarged Hyundai logo—the real attention grabber is Hyundai’s big new hexagonal grille, flanked by LED daytime running lights set in deep housings that look as though they could be air scoops for a set of racy carbon-ceramic brakes. (Bulletin: Carbon ceramics are not on the options list.) 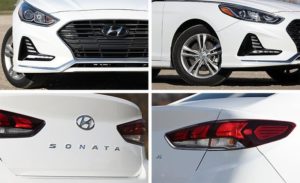 That large central maw—Hyundai calls it the “cascading grille”—suggests there might be some potent source of propulsion behind it that requires mass quantities of air for optimal operation. The Sonata’s let-me-at-’em look may lure prospects into showrooms, but what they’ll find under the reshaped hood doesn’t measure up to the suggestion of the exterior. All of the Sonata’s powertrain offerings—there are five if you count both the hybrid and plug-in-hybrid models—carry over from 2017, and even the most potent is no match for the top engines available in the new Honda Accord or the latest Toyota Camry, the perennial mid-size sedan pacesetters.

That includes the 2.4-liter inline-four in our test subject, an example of the new-for-2018 SEL trim level. It’s positioned above the base SE and Eco models, the latter being the only one to employ a turbocharged 1.6-liter. Above the SEL, you’ll find a bifurcated path to Sport and Limited trims, each of which is offered with a turbocharged 2.0-liter that appends 2.0T to the model name and puts 245 horsepower to the wheels through a new eight-speed automatic.

The naturally aspirated 2.4-liter we tested, by contrast, has been the Sonata’s standard engine since 2011, and makes 185 horsepower and 178 lb-ft of torque. This direct-injected four pairs with a six-speed automatic transmission; a manual shifting mode is available via the shift lever (there are no paddles), but it doesn’t seem to affect performance one way or another. There is no manual-transmission option.

The 2.4 propels the 2018 Sonata with a smidge more vigor than it did in a 2015 Sonata we tested—this 2018 SEL was a half-second quicker to 60 mph and a wink or two faster at every other data point, even though curb weights are roughly equal.

All of this adds up to “okay” marks on the great mid-size-sedan scorecard, and the same goes for the new Sonata’s dynamics. The consensus of the product planners was that the Sonata’s chassis needed no attention, so the only revision to the suspension is heftier rear control arms.

The ride and handling rate as fine, without rising to exceptional. Cornering responses aren’t as decisive as those of the latest Accord, and if the new control arms add anything to the character it’s essentially subliminal. Cornering grip of 0.85 g on our skidpad trails the Accord 1.5T’s 0.89 g and the Camry SE 2.5L’s 0.88 g. Braking from 70 mph to a stop in 167 feet also stacks up as okay, better than the Toyota’s 175 feet but longer than the Honda’s 163-foot stop.

Steering is a notch or two more tactile than many but unlikely to be perceived as sporty. (As in almost all contemporary sedans, the Sonata’s is an electrically assisted rack-and-pinion system.) Here, too, the Sonata earns a passing grade by being unremarkable. The Sonata’s dynamic forte is ride quality that’s compliant without excessive rock and roll, fortified by quiet operation at freeway speeds.

Where the 2018 Sonata goes beyond okay is inside its cabin. Materials have a high-quality look and feel, the new instrument cluster is attractively legible, and the redesigned center stack will delight those who prefer secondary controls of the physical variety, offering plenty of buttons (18) and knobs (4). There are no operating mysteries here, no poking at a touchscreen whilst rumbling over a stretch of nasty pavement. 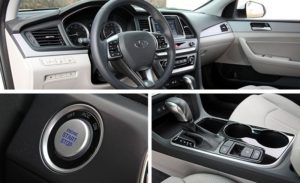 And, typical of Hyundai, the Sonata’s value is higher than that of most of its competitors, with plenty of standard features even at the basic SE trim level. A 7.0-inch touchscreen infotainment system with Apple CarPlay and Android Auto connectivity, automatic headlights, and a blind-spot monitoring system are standard on all trim levels. In the SEL trim (a $1650 step up from the SE) there’s a standard proximity key and push-button start, a power driver’s seat, heated front seats, and a USB port for the rear passenger compartment. The SEL is the lowest trim level that offers the $1000 Tech package that came our test car, which includes automated emergency braking, lane-keeping assist, and adaptive cruise control. Besides $125 for carpeted floor mats, the Tech package was the only option, which means this Sonata packed a lot of high-demand content under a $25,710 sticker. Only in the top-level Limited 2.0T does the price cross the $30K frontier before options. If the turbo’s power isn’t terribly important to you, though, many of the Limited’s luxuries are available in other Sonatas for considerably less.

The 2018 Sonata packages competent performance in eye-catching new clothing. Considering the content at the price, for a pleasant, well equipped, and nonintrusive motoring experience, it’s a good deal. And we’re okay with that.

PrevPreviousA specific text character can crash iPhones or start a continuous reboot loop
Next‘How’s your credit?’ and 5 other important money questions to ask before saying ‘I do’Next