4 tips for improving happiness with your job 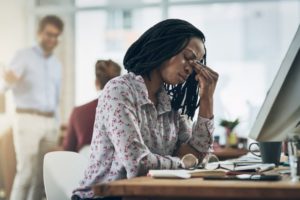 U.S. employees are generally a happy lot: Most workers peg their job satisfaction at a seven or more on a scale of one to 10, a recent survey shows.

Yet what if you’re among those whose work happiness level is less than enviable?

For workers in the doldrums, spending the bulk of their waking hours in a place delivering little joy can become a downward spiral. While misery on the job can seem insurmountable at times, breaking down what you can control — and therefore change — can go a long way toward improving your happiness at work before it gets worse.

“The biggest problem comes from disengagement,” said Anne Marie Segal, founder of Segal Coaching in Stamford, Connecticut. “Employees will feel unsatisfied and start to separate their goals from the company’s, and then start to ask, ‘Why am I here?'”

While the current climate for job-seekers is good — low unemployment of 4.1 percent means less competition for open positions — not everyone is able to leave their current job, for reasons like schedules, key employee benefits, location or family obligations.

If looking for a new job is not an option or you’re unconvinced the grass will be greener elsewhere, there are ways to try making your current working situation more palatable.

Reconnect with the bigger picture

Like an interconnected web, all positions in an organization have a purpose that feeds into the big-picture goals. Yet if you feel like you’re doing busy work or repeating the same monotonous tasks, it can be easy to forget that you actually are contributing in a meaningful way to the company’s goals.

“A lot of times we become disengaged because we don’t feel like we’re moving the ball forward,” Segal said. “If you can think about your job as playing a role in what the company is trying to achieve, it can help you feel tied to something bigger than yourself.”

Basically, reconnecting can bring a sense of purpose to your work.

The upshot? “You feel more connected, more in charge of your career and you feel like you are driving your own ship,” Segal said.

Depending on your company or organization, there could be opportunities to get involved in a group that pulls its members from across the firm.

For instance, your company could have a wellness committee or diversity committee, Segal said. Or, maybe there’s even a bowling or softball team your company sponsors.

Reaching out beyond the confines of your daily responsibilities can give you a break from the usual.

“A lot of times we start feeling like we’re doing the same things over and over,” Segal said.

It also gives you a chance to meet other people across the company that might end up becoming positive influences in your professional pursuits. In addition to breaking up monotony, it can help you feel more connected to the organization as a whole.

If there is an organizational problem with your job — i.e., you’re doing the work of two people due to an unfilled position — there’s a better chance of it getting corrected more quickly if you can present your supervisor with a proposed solution.

For instance, in the above situation, you could suggest hiring a temp or an intern to help ease the load until the position is filled (and offer to take care of it).

“The idea is to be solution-oriented rather than going in with a complaint,” Segal said.

Sometimes, the tug-of-war between personal-life needs and professional needs creates enough consistent conflict to drag down your overall mood.

Importantly, Segal said, stop feeling guilty. “You simply cannot ‘do it all’ and focusing on what you cannot get done takes your energy away from what you are doing,” she said.

Prioritizing also can be helpful.

“Say no to projects and activities that do not advance your goals and yes to those that do,” Segal said.

It’s also important to make sure you are taking care of your health and family. “If you lose either of those, you may not get them back,” she said.