2018: The Year of the Trillion-Dollar Company 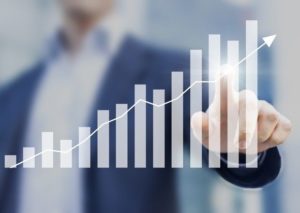 For years, the trillion-dollar market cap loomed as a near-mythic milestone for stocks. No public U.S. company had ever reached the thirteen-digit mark, and it seemed to effectively present a ceiling on a stock’s growth, considering the GDP of the whole country is only around $18 trillion.

However, after a surge in stock prices last year, especially in the tech sector, and another jump in January, there are now a number of giants with the potential to eclipse the trillion-dollar mark as soon as this year. Among them are Apple (NASDAQ: AAPL), Alphabet (NASDAQ: GOOG) (NASDAQ: GOOGL), Microsoft (NASDAQ: MSFT), and Amazon (NASDAQ: AMZN). All four of their stocks gained 33% or more in 2017, and look poised to rise further. Let’s take a look at where they are now, and what their chances are for cracking the trillion-dollar barrier.

The iPhone maker has held the title of most valuable American company with only brief interruptions for the past six years, so most observers have expected it would be the first trillion-dollar U.S. company. Apple surged past Microsoft in market value in 2010, and then surpassed ExxonMobil in 2012 to take the most-valuable company title. After ceding the lead back to Exxon in 2013, Apple took it back shortly thereafter. And for a couple of moments in 2016, Alphabet replaced it at the top spot, but Apple has now been comfortably in the lead for nearly two years.

Earlier this month, the Mac maker’s market cap topped $900 billion, but its share price has since dipped on concerns about iPhone X sales. The company said recently that it would cut the production targets on the new high-end smartphone by half.

Still, a strong first-quarter earnings report later this week could propel Apple above the trillion-dollar mark, especially if it shows strong iPhone X sales. With its market cap at $857 billion today, the stock would need to rise 17% to push it over the top.

Shares of the search giant have climbed fairly steadily over the last five years — a markedly different path than the volatile course Apple stock has charted. With its dominance its search advertising, the Google parent has been able to put up steady growth as its products become even more integrated into modern life. In its most recent quarter, revenue increased 24% to $27.8 billion and earnings per share jumped 32%. Its operating margin of 28% shows the strength of its ad business, and the cash it spins off has allowed it to take risks investing in new technologies like self-driving cars.

Those “moonshots” have yet to yield profits so far; indeed, the company continues to lose billions of dollars on its “other bets” category each year. However, pioneering an industry like autonomous driving would likely make those investments worthwhile. Alphabet has recently narrowed the gap with Apple as the stock is up 13% year-to-date, giving it a market cap of $826 billion.

Alphabet’s earnings report too comes out this week, and it should tell observers a lot about whether the company could exceed a $1 trillion market cap this year. From its current price, the stock would have to gain 21% to get there.

The Windows-maker has quietly kept a foot in the race to $1 trillion. Under the guidance of CEO Satya Nadella, the company has built a thriving cloud business, doubled down on business services with the acquisition of Linkedin, and unlocked value with decisions like releasing Microsoft’s Office suite for the iPad, and the creation of the Surface Book, the company’s first laptop.

Revenue and EPS have increased by double-digit percentages in recent quarters, and the stock has surged by about 50% over the last year. While its valuation may be getting stretched, strong growth in the cloud division could push the stock higher. Microsoft would need to deliver another 38% gain in share price (not including the impact of share buybacks) to reach a $1 trillion market cap, which won’t be easy, but it could cross the plane next year. The software giant reports second-quarter earnings on Wednesday.

Among this group, the e-commerce giant has gotten off to the fastest start in 2018: The stock’s already up 22% this year. Reports of a strong holiday season for retailers, as well as the market’s general bullishness, seem to have propelled that huge gain. The company again flexed its innovation muscles as it opened its cashierless Amazon Go convenience store to the general public last week, and is expected to post another quarter of monster sales growth when it reports earnings later this week.

Led by Jeff Bezos, the richest person in the world and the one of the most admired entrepreneurs of his era, Amazon has built an unrivaled web of competitive advantages with its Prime loyalty program, the leading cloud computing business, fulfillment network for vendors, and even a burgeoning online advertising business that could threaten Google and Facebook.

When Amazon hit $1,000 a share last year, I speculated that it might not be so long before it hits $2,000. Less than eight months later, the stock is already halfway there. While it would need another 46% gain to give the company a $1 trillion market cap, with a revenue growth rate above 25%, Amazon seems likely to get there by next year if not sooner, assuming the broader market keeps moving higher.

The race to the trillion-dollar market cap is a reminder that artificial barriers eventually fall in the stock market as economic expansion over the long term is essentially a given. The surging growth of these stocks also shows that market euphoria and strong results can overcome the business world’s version of the law of large numbers, which asserts that the larger a company gets, the harder it is for it to maintain a rapid growth rate, since it can’t outgrow the economy.

If this week’s round of earnings reports goes well, we should see at least one, if not two, three, or even four trillion-dollar companies by the end of the year, as these businesses continue to generate hundreds of billions in wealth for shareholders.

PrevPreviousThe top 5 tech companies to work for in 2018
NextFuture of farming: How new technologies are transforming Alberta agricultureNext