Calgary-based explorers on an expedition in British Columbia just north of Fernie have discovered Canada’s deepest cave, its longest shaft stretching roughly the length of a 35-storey building.

Kathleen Graham and Jeremy Bruns were part of the nine-person team of volunteer explorers who made the discovery early in the new year.

Graham said the last time a team set out, members learned the cave was so deep that they didn’t have enough equipment to get all the way to the bottom.

“We did an expedition on Thanksgiving,” Graham told CBC Calgary’s The Homestretch on Monday.

The cave, named Bisaro Anima, can only be reached by helicopter. 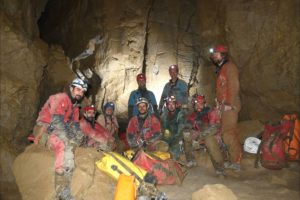 Bruns stumbled across the cave’s entrance five years ago on an expedition organized by his father, Henry Bruns.

“We went up there for about a week and looked for some holes in the ground. We found this little crack that turned out to be this big, big cave,” he said.

“We’ve got all sorts of different kinds of passages in there. We’ve got deep canyons, small squeezes and lots of loose rock that is in danger of falling down on you constantly. It can be a challenging environment.”

Team members wanted to learn what was beyond the lake they observed in October.

“The logistics of getting scuba equipment there are quite onerous,” Graham said.

“The gear arrived in poor condition so we had to make a Plan B, but we got our primary objective done. One of the tanks of air was totally empty.”

Bruns said documenting what the group found was the priority.

“We measure point to point as we travel through the cave, so we are not just wandering around finding new stuff,” he said. “We set survey stations. We measure distance, inclination and azimuth from station to station.”

Graham said because of the distance involved getting in and out, they had to sleep in the cave, camping underground for a week.

“It was like hanging out in a refrigerator. It’s 100 per cent humidity, 2 C, cold and dark. We sleep in hammocks. The ground is a lot of big boulders so not many flat spots. I sleep with a light around my neck, so if I wake up in the middle of the night, I don’t have to panic,” she said.

And it was a communications-free time, which had its advantages.

“We’ve got a satellite phone at the surface, but we resort to writing notes to each other in books. You are not in touch with the outside world and that’s one of the things that I like. You just go back to the basics of keeping warm and fed and none of that Facebook stuff.”

Bruns said it’s incredible being the first to experience something.

“We are not just gluttons for punishment,” he said with a laugh.

“We are really excited at the notion of being places where nobody has ever been before, making a map of that and discovering new things and bringing that back to share with our colleagues and the wider community.”

Bruns and Graham are part of a local group that brings together caving enthusiasts — the Alberta Speleological Society (ASS). They share their findings at meet and greets at 8 p.m. on the first and third Wednesday of each month at the Hop In Brew pub on 12th Avenue S.W.

The expeditions were supported financially by ASS and the Royal Canadian Geographical Society.

PrevPreviousNo, The Full Moon Does Not Cause Earthquakes, Study Finds
NextNew Pressure Sensor for Medical Uses Dissolves in the Patient’s BodyNext